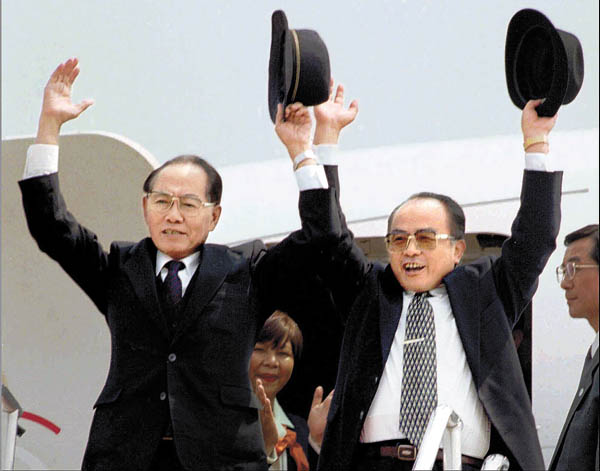 Hwang Jang-yop, the architect of North Korea’s Juche ideology who defected to the South in 1997, considered seeking asylum from the U.S. government because he feared for his life in Seoul, according to his former aide Kim Dok-hong.

In an exclusive interview with the JoongAng Ilbo on Saturday, the 67-year-old Kim, who left Pyongyang along with Hwang, the highest North Korean to defect to the South to date, spoke up for the first time about the defection process.

Kim recalled that Hwang, a former secretary of the Workers’ Party, claimed that he was behind the Juche, or self-reliance, ideology rather than North Korea founder Kim Il Sung or his son Kim Jong-il, and that this “slip of the tongue” led him to seek asylum.

On his way back from a trip to Japan to give a special lecture on Juche, Hwang went to the South Korean Embassy in Beijing on Feb. 12, 1997, to seek political asylum.

At the time of the defection in February 1997, Kim described that then President Kim Young-sam in a personal letter promised to treat Hwang with the respect due a minister-level official and Kim as a vice-minister-level official, and pledged to help support activities to democratize North Korea.

“But that promise was not kept by the Kim Dae-jung and Roh Moo-hyun administrations,” he recalled.

“Former Secretary Hwang was deemed an ‘enemy’ by the Kim Dae-jung government’s National Intelligence Service,” said Kim. “And feeling threatened that the NIS may kill him, he even requested asylum from the U.S. government.”

This was in July 2001, and Hwang deemed that there were two options to counter the threat of being killed by the NIS--applying for asylum with the United States or whistleblowing to the media. U.S. Senator Jesse Helms, then chairman of the Senate Foreign Relations Committee, even sent him an invitation, which he could not accept because the NIS said it would worsen North-South relations.

This marks Kim’s first interview with the Korean media since he defected to Seoul and comes ahead of the publication of his memoir entitled in Korean: “I am a Liberal.”

Kim currently resides in a safe house in southern Seoul, and he was guarded by police during his meeting with the newspaper.

When asked the real reason for Hwang to defect, Kim replied, “Secretary Hwang made a remark claiming, ‘Juche ideology was made by me, not Kim Il Sung or Kim Jong-il,’ at an international forum in Moscow in February 1996.”

Kim continued, “Kim Jong-il was infuriated when he received this report. In mid-June [of that year] former Secretary Hwang told me, ‘It doesn’t seem like Kim Jong-il will just let me off. Before I get into trouble, please get me some poison so that I can commit suicide.’”

And it was not Hwang who first came up with the idea to defect to South Korea.

“There were many friends within the party who said, ‘We cannot leave Secretary Hwang to be sacrificed at the hands of Kim Jong-il,’ and resolved to seek political asylum for him,” Kim said. “So I convinced Hwang not to end his life and go to South Korea to struggle against Kim Jong-il. And he told me, ‘I refuse to go to Seoul without you.’”

Kim was then told by Hwang to seek a way of getting to South Korea.

“I felt pride when party officials said that Hwang, who was unable to find his way to a shop alone, was able to defect completely because of me,” he continued.

Kim said he was able to make contact with the South Korean government through a covert operation. Initially, they tried to defect to the South in April 1997 but at the end of January that year, there was a forum on Juche in Tokyo.

There, they made contact with a South Korean intelligence official who warned them, “It seems like the media got hold of the news.”

Hwang, after the forum, went from Japan to Beijing on Feb. 12, and headed into the Korean Embassy.

Because he managed the reference room for the Central Committee of the Workers’ Party, Kim was also privy to a lot of confidential documents.

“It was reported to Kim Jong-il in April 1991 that the scientist at the Yongbyon nuclear complex made a breakthrough in research that could lead to nuclear development,” said Kim.

He said that Kim Jong-il told Jon Pyong-ho, former Workers’ Party secretary and director of the party’s Munitions Industries Department, “Today is the day when my lifelong wish has been reached.”

But Kim recalled that in February the following year, Kim Il Sung remarked on the contrary, ‘It is unimaginable to develop nuclear weapons that can annihilate the same people [as us].”

After Kim defected to South Korea, he worked for the NIS’ North Korea policy research institute and a North Korean defector organization, but his activities were prohibited during the Kim Dae-jung and Roh Moo-hyun administrations.

When asked if his relationship with the South Korean NIS is still strained, Kim replied that is not anymore. He thanked the Park Geun-hye government and NIS for this.

“This can be my last chance,” he said, “so I plan to confess everything.”

“It became known after Secretary Hwang defected that his wife committed suicide, but actually, the person who died was my wife Pak Bong-sil. Because she was unable to bear the fear, she chose death. This is because she married a wretched man.”