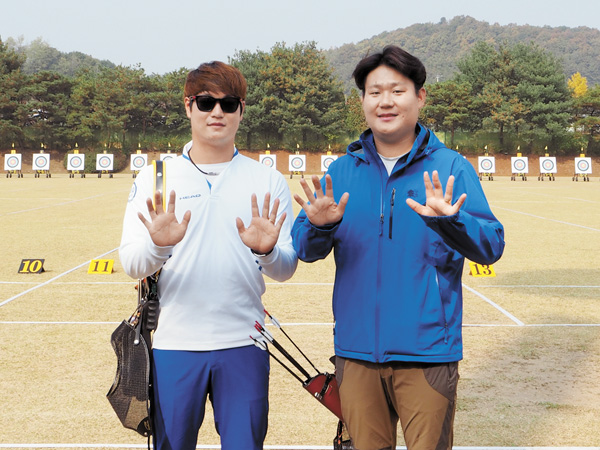 Lee Seung-youn, left, and Kim Bub-min display their perfect score with a show of hands at the National Sports Festival on Monday. [Kim Won]

Sports fans sometimes joke that for Korean archers, winning a domestic event is more difficult than winning the Summer Olympics because there are so many talented archers in the country. Maybe it’s not a joke.

At the 96th National Sports Festival held in Wonju, Gangwon, Kim Gyu-chan had a perfect score in the men’s 30-meter recurve final on Monday, but that wasn’t enough to get him a gold medal. Instead, he had to settle for bronze because two other archers also had perfect scores ... and landed closer to the center of the target.

Lee Seung-youn, 2013 World Archery Championship winner, and Kim Bub-min, who won bronze in the team event in the 2012 London Olympics, also made their 36 shots in the 10-point area of the target.

As all three archers had the same score of 360 points, the organizers decided to judge the winner by the number of arrows that landed nearest the very center of the target, known as the “X-10”, which is only 4 centimeters in diameter. It turned out Lee and Kim Bub-min landed 24 arrows in the X-10, while Kim Gyu-chan only had 20. Lee and Kim Bub-min shared the gold medal.

“Two year ago, I also shot the perfect score, but had less X-10s, and finished in second,” Kim Gyu-chan said after the event. “But I never thought I will finish third [with this score].”

However, Kim Gyu-chan did win the 50-meter recurve and led the overall singles event in points.

The 30-meter recurve uses a 80 centimeter diameter target, but because the distance is the shortest of the archery events at the National Sports Festival, archers have recorded perfect scores a couple of times.

Because there are so many talented archers, players know winning a domestic event is as tough as winning an international event.

“Because we have a strong depth of archers and their skills are not different, competition is really fierce,” said Kim Bub-min.