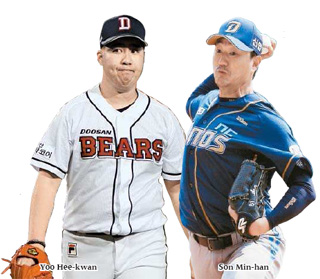 Foreign pitchers are leading the way as the NC Dinos and the Doosan Bears meet tonight in critical Game 3 of the KBO League playoffs at the Bears’ home ground Jamsil Baseball Stadium in Seoul.

The two teams are currently sharing the best-of-five series at 1-1, thanks to the performances of their foreign pitchers. The winner of this playoff goes to the Koreans Series where regular season champion Samsung Lions are waiting.

The Bears collected a 7-0 victory in Game 1 on Sunday at Masan Baseball Stadium in Changwon, South Gyeongsang after Dustin Nippert had a shut-out game. The 34-year-old American right-hander allowed only three hits and two base-on-balls, while collecting six strikeouts in nine innings. He became the 20th pitcher in KBO postseason history to have a shutout game.

This is the first time in 19 years that starting pitchers from each team have pitched nine innings in two straight games in the KBO postseason. As teams have divided roles of pitchers these days, such as having a relief and closer, it is rare to see a starting pitcher playing the entire game.

Since 2000, there have been only six occasions in KBO postseason history that a single pitcher has taken the mound alone.

“In big games, the power of the ace pitcher is immense,” said the Dinos manager Kim Kyung-moon after the game on Monday. “If the ace pitchers pitch well, the team gets more power. Other players gain confidence because they know getting only a couple runs can deliver a win.”

As Nippert and Stewart delivered not only a victory, but also a cushion for both the Bears and the Dinos on their use of pitchers, Game 3 comes at an important time.

In KBO postseason history, there were 16 occasions where two teams were tied 1-1 in the best-of-five series. But the team that won Game 3 took the series in 10 occasions.

For Game 3, the Dinos announced they will start veteran pitcher Son Min-han, while the Bears said its lefty ace Yoo Hee-kwan will start.

For the Dinos, Game 3 will be crucial because this is the first of their two away games in the series. If the Dinos can collect a win tonight or Thursday, they can play Game 5 at home.

Before entering the playoff, the Dinos had four practice games and their starting pitchers were Erick Hacker, Stewart, Lee Jae-hak and Lee Tae-yang. While many thought Jae-hak would be the starter for the Game 3 considering the rotation, Dinos manager Kim decided to use Son, saying he has a good feeling about the 40-year-old right-hander.

“In this short-term race, a pitcher who gives a good feeling does well on the mound,” Kim said. “Son is also in good condition and he is a player with a good career.”

The Bears are challenging the veteran with Yoo who had a career best season and achieved the most wins for left-handed pitchers in the franchise history. The 29-year-old went 18-5 with a 3.94 ERA. He had 17 quality starts (allowing three or less runs in at least six innings) in his 30 starts in the season.

Against the Dinos, Yoo went 2-1 with a 2.84 ERA. He is also strong at the home stadium, going 12-2 with a 2.84 ERA. Yoo, the winner of this year’s Choi Dong-won Award, which is given to the best Korean pitcher, allowed three runs in just four innings against Nexen Heroes on Oct. 13 at the KBO League first round playoff, but in the post season, he has gone 1-2 with a 2.16 ERA.

“This time, I want to pick myself as a key player,” Yoo said. “I thank my teammates for giving me this opportunity to retrieve my honor.”

Offensively, both teams hope their core hitter will recover form. The Dinos hope Eric Thames, who topped the league in batting average (.381), slugging percentage (.790) and on-base percentage (.497), will show his power. The 28-year-old went 2-for-6 in the first two games.

The Bears are betting on Kim Hyun-soo, who had his career best in home runs (28) and had a franchise record of 121 RBIs in the regular season. In this playoff so far, Kim, 27, went 1-for-8 and had only one RBI.