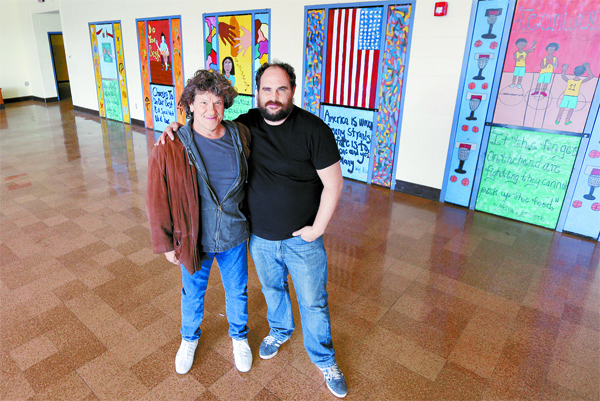 WOODSTOCK, New York - It’s a syllabus you can head bang to.

Students at the Woodstock Music Lab will bend notes alongside guitar heroes, and jamming in class will be encouraged. Assignments will include recreating the Beach Boy’s classic “Pet Sounds” note-for-note and making a progressive-rock album based on Egyptian mythology.

So it will go at the rock school for college-age students planned for the famous Catskill Mountains artists’ colony in the coming years. Think Juilliard with power chords. Or, as co-founder Paul Green said, think of a “giant, fertile petri dish” where young guitarists, producers and arrangers rub shoulders with each other.

“Odds are you can step out of the studio and say, ‘I need a saxophone,’ and some other kid here working on a jazz project will say, ‘I’ll be right down!”’ Green said as he showed off the old elementary school that will become the school. “It gives you that sort of Abbey Road, Muscle Shoals, Motown sort of collective beehive.”

Green is the voluble, veteran rock teacher often credited as being the inspiration for Jack Black’s jet-fueled character in the 2003 movie “School of Rock,” though the movie’s writer has denied that. Among the other co-founders is Michael Lang, the promoter of the original 1969 Woodstock festival, which took place in a muddy field some 50 miles from here.

Their group has raised several million dollars and needs more than twice the amount. They hope to open the school as early as next year, though Lang said that timetable is optimistic. They reached a milestone this summer by closing a $1 million deal on a pale brick former elementary school a few miles from Woodstock’s central village.

Walking through empty classrooms this week, Green and Lang described where performance spaces will be and how the gym with climbing ropes attached to the ceiling will become a recording studio big enough for an orchestra. The school will offer a two-year program in which students will learn performing, production, arranging and marketing.

“We’re really looking for people who want to get an education about the entire business,” Lang said.

They are looking for talented college-age and post-college students. Metal heads, indie types and beat makers are all welcome. Everyone will take two instruments a semester, one the student chooses and the other chosen by faculty members. They will not grant degrees at first, but expect students will be able to earn college credits acceptable at other institutions.

A big attraction will be guest professors. Green and Lang will use their music-world connections to bring in names, some who have homes in the woods around Woodstock. For now they’re naming just a handful, such as former Yes singer Jon Anderson.

Rock has had an ambivalent relationship with formal education at least since Chuck Berry sang about teachers “teachin’ the Golden Rule.” But Lang and Green see their school nurturing young artists in a way that big record companies have largely abandoned.

Mark Mulligan, a music industry analyst at London-based Midia Research, said such a talent incubator could be useful, especially in an era when bands looking to get signed need to work not only at music, but skills such as marketing and social media.

Green stressed that their focus will be on creating great art like that of the Rolling Stones and Radiohead. Asked if a strict curriculum could strangle the spirit of rock and roll, Green laughed and offered a joke.

“We’re standing over the spirit of rock and roll with some paddles and rubbing them together,” he said, “and I’m yelling, ‘Clear!’” AP