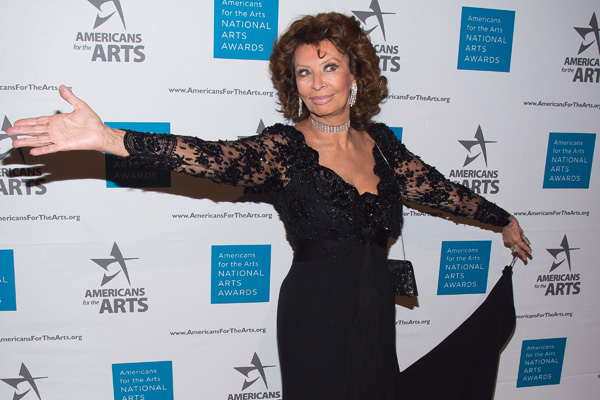 NEW YORK - Some things about the film business have changed for actresses in the more than five decades since Sophia Loren was first discovered, and some things have stayed exactly the same.

Take pay equity, for instance, and the reality that worthy actresses sometimes make less than their male counterparts.

“It never changed. It’s always the same. It’s always the same like before, but not only in the movies. Even in life sometimes, unfortunately,” Loren said on the red carpet Monday night before the nonprofit Americans for the Arts honored her at its National Arts Awards.

Herbie Hancock and Gaga were also among the honorees, but it was Loren who stole hearts in a black evening gown, accompanied by son Edoardo Ponti and daughter-in-law Sasha Alexander.

At 81, Loren still works when the mood strikes. The word retirement is not in her vocabulary.

“That’s terrible, the word retire. Never,” she said. “We start always like it was the beginning of a long career.”

With the onslaught of technology and the speed at which the world turns today, Loren said she enjoys embracing the “new” in life.

“Well I think you have to get accustomed to the new things that come out and try to run after them and try to be always living in a world that belongs to you, even though you have to learn many things more,” she explained.

What is Loren’s best advice for young actresses today?

“To take life seriously,” she said, “to do the right things and not to take life easily, as sometimes the girls, they do because they don’t have experience.”