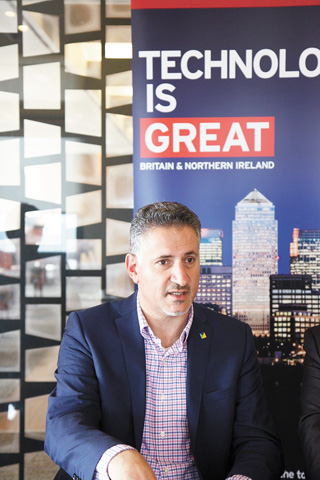 The company’s training campus will be called the Fintech Hub Seoul.

“We already see a strong beginning of this sector in Korea, together with a positive attitude from the regulator. With our experience, we hope to make Korea into a fintech hub,” said CEO Eric van der Kleij at a press conference in central Seoul on Tuesday. “The Korean government’s evolving policy environment is ideal for us to start forming a business environment for fintech.”

The project’s main focus is to create space for incubators and develop a series of fintech start-ups, he said.

Entiq is considering opening an office in the heart of Korea’s Wall Street, at the International Finance Center (IFC) Yeouido, southwestern Seoul, in December, which will be the corporate centre of Entiq Korea.

The firm, which plans to open the center jointly with about four Korean financiers, said it will invest 1 billion won, and is planning a fund to accumulate a further 150 billion won.

Once the center opens, it will select 40 to 50 Korean fintech start-ups as early as next year, and offer a three-month long training program.

From that group, four to five top start-ups will receive direct investments from Entiq Korea and get a chance to show their innovations to the company’s business connections.

Entiq also said it plans to open a small technology R&D lab that mainly studies cutting-edge fintech technologies. One of the examples developed in the lab is called block chain technology, which secures financial transactions to make data manipulation or hacking impossible.

Van der Kleij said this may be one of the most significant innovations in finance in the future when fintech becomes more universal.

Although Korea is in the early stages of fintech development, the country has high growth potential thanks to high tourism and the high volume of financial transactions with other Asian countries, said Peter Chun, senior development executive of Entiq.

Van der Kleij, said, “Also, the most significant purpose of opening the boot camp in Seoul is to bring in the international fintech community with interest of doing business in Korea.

“We hope British and other European fintech companies [will see Korea] as a springboard for international expansion when they want to explore Asian markets.”

In 2011 he headed a group that was charged by the British Prime Minister’s Office with developing London’s “Silicon Roundabout” technology cluster.

Today, there are more than 17,000 start-ups in London compared to 300 in 2011, making the British capital the world’s start-up hub where an annual investment of about $620 million is invested in fintech start-ups.