Cho Woo-bin, head and founder of snowboarding gear brand ROMP International, is benefitting from the cross-border e-commerce boom, as his online mall has helped boost the sales of the company headquartered in Gangnam District, southern Seoul. [ROMP INTERNATIONAL]

It wasn’t always easy for Cho Woo-bin to keep his profits flowing year-round.

As the founder and head of snowboarding gear brand ROMP International, most of his sales took place right before the winter sports season started.

Profits would soar in October and November when people were outfitting themselves for the slopes, only to plunge during the spring and summer.

But things changed when snowboarders outside Korea started buying from the brand via its foreign-language online mall.

“In New Zealand, for example, people usually look for snowboard clothing in April and May because winter starts in June. The sales season lasts even longer in a country like Russia, where winter is longer and harsher than elsewhere.” Cho said.

“So, we made sales even in the summer, which used to be our off-season.”

“I was a bit bewildered to learn that such a huge number of people are willing to place orders with lesser-known foreign manufacturers,” he said.

As certain sites have made it a breeze for shoppers to buy from countries thousands of miles away, retailers like ROMP are capitalizing on the popularity of cross-border e-commerce.

Not only do cross-border transactions boost overall sales, but they also help seasonal products find year-round markets. Both e-commerce giants such as G-Market and 11st and individual merchants are looking at online malls serving foreign consumers as a growth engine to address limited consumption in the local market.

ROMP now sells items to 17 countries including China, Japan, Australia and Bulgaria, with foreign-language sites in English, Japanese and Russian.

Behind ROMP’s push to go beyond its home country is Cafe 24, the country’s largest Web hosting companies for online shopping malls.

The emergence of cross-border e-commerce sites led the agency to provide foreign language options to its client sites in 2013. The service automatically adjusts certain features to reflect the country from which a consumer is shopping.

The sites hosted by the firm also show prices in the local currency, and calculate taxes and shipping costs.

The number of online malls with foreign-language pages rose to 41,000 as of the second quarter this year, from some 20,000 in the same period last year, according to Cafe24.

The blossoming business coincides with the increase in the amount of transactions made by foreign users in Korean online shopping malls. 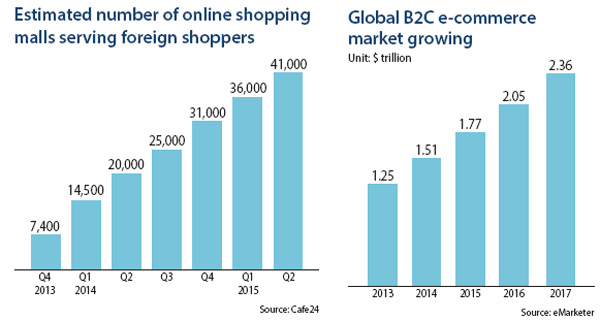 Spending by foreigners on Korea-based e-commerce sites was 370 billion won in 2013, but the figure rose by 56.8 percent to 580 billion won last year, according to the Ministry of Trade, Industry and Energy.

While sales from foreign consumers account for less than half of the entire revenue at ROMP, some shops count foreigners as their primary clientele.

Aileen Doll, a doll manufacturer, only operates an English-language online mall, and most of its orders come from outside Korea.

Cell phone case manufacturer Happymori is also among the shops that cater mostly to foreigners.

“There are a growing number of e-commerce sites that serve people across the world by adopting operations that suit each country they serve,” said Lee Jae-seok, head of Cafe24.

Unlike individual merchants that depend on intermediary agencies, large online malls tend to target foreign shoppers by forming a joint venture with local players in other countries.

11st, one of the top-three trading platforms in Korea, currently operates offices in three other countries and is gearing up to expand into more markets.

The company launched its first overseas office in Turkey in 2013, under the name “n11.com.” The move was also the first time a Korean e-commerce company established a corporate body overseas. Within a year of launching, the platform recorded a quarterly trading volume of about 160 billion won ($141.28 million), in the fourth quarter of 2014. Today, it’s the top player in the business-to-customer (B2C) e-commerce sector, ahead of big names like eBay.

11st’s operator SK Planet chose Turkey as its first overseas destination because young people in the country ? the platform’s target audience have widespread access to the internet.

The operator banked on its differentiated services to attract both sellers and buyers.

In Turkey, for example, n11.com offers free marketing and training programs to local sellers and a studio where sellers can take professional-quality photos of their products. For everyday buyers, the company implemented a customer service hotline that operates around the clock.

SK Planet went on to target Indonesia and Malaysia, pinning high hopes on the pervasiveness of smartphones in the countries, as well as recent leaps in the development of local telecom services. The company also cited the higher economic growth predicted for Indonesia and Malaysia than other major economies.

The Indonesian version of 11st, called “elevenia,” opened in March last year, and has grown to be the country’s second-ranked open-market website. The company launched its Malaysian version, named “11street,” in May, and is currently beefing up its position in the market. Most of the sellers on the website are local retailers of various sizes.

In fact, Asia was the world’s largest market for B2C e-commerce at $525.2 billion last year, followed by North America, Europe, Central and South America and Africa, according to eMarketer. The region also showed the fastest pace of growth, estimated to grow up to $1.05 trillion in 2017. The North American market, in contrast, is expected to grow from $482.6 billion last year to $660.4 billion in 2017.

Despite the anticipated opportunities, some industry insiders in Korea initially predicted substantial challenges for SK Planet’s expansion because the world’s largest e-commerce companies already held a strong customer bases in its targeted markets.

However, the company said it has quickly grown into a top online shopping market with a significant share of all three markets.

“When we entered, there were already big players dominating the e-commerce industry, but SK Planet was the only company that provided strong services for both sellers and buyers, ranging from membership benefits and mileage accumulation on mobile sales to vouchers and payment services,” said Kim Hwan-yeong, head of the e-commerce business analysis division at SK Planet. “We’re not the world’s top yet, but we hope to grow into one of the top players by becoming influential in emerging economies that have huge growth potential.”

“The e-commerce industry was still in its early stage when we first opened elevenia, so most online shopping malls allowed consumers to pay for products only once they’d actually arrived,” said Park Eun-ho, head of sale management division at elevenia. “We thought that getting consumers’ trust was the most significant task, and nowadays, the pre-payment culture is settling down.”

Fashion products were most popular in the early days of launch, but SK Planet realized local consumers were also interested in Korean home appliances, electronic devices and cosmetics products.

In all three markets, home appliances were the best-selling products last month. In Turkey, top sellers also included household products like cleaning supplies, while in Indonesia, gift cards and groceries were most popular. Malaysian consumers tended to prefer clothing.

SK Planet also started selling airline tickets and services like gift cards and “gifticons” -- one of the most popular options in Korea, which is a kind of gift card that can be exchanged for one particular product -- as part of efforts to gain consumers’ trust and expand the range of its products sold online.

Another successful move for 11st was deciding to enter each market by establishing a joint venture with local telecommunication giants in order to quickly adapt to local consumers’ needs and get access to a stable telecom infrastructure. SK Planet joined hands with Dogus Group in Turkey, Pt. XL Axiata in Indonesia and Celcom Axiata in Malaysia.

According to data from global researcher for the digital marketing industry eMarketer, the world’s business-to-customer (B2C) e-commerce market is expected to grow to $2.36 trillion in 2017, up from $1.51 trillion last year.

However, SK Planet’s overseas business managers said that beating other world-class competitors won’t be easy, despite the popular notion that Korean goods will sell well overseas thanks to the Korean Wave.

“We had the same expectations - that many K-Pop related products and products advertised by celebrities would sell well -- but we soon realized the reality was quite tough,” said Park from elevenia. “Korean products directly sold from home were not so popular due to pricey shipping fees and tariff issues.

“So, we decided to localize ourselves and strengthen locally produced products. Halal products are one of the popular products on elevenia,” Park added.

After the success in the Asian market and Turkey, SK Planet is preparing to expand business in North America and Europe.

Analysts see that stiff competition in the local market accompanied by limited demand has also prompted other e-commerce sites to look abroad.

“Many social commerce companies like Coupang, WeMakePrice and T-Mon and even home shopping companies are trying to expand by strengthening their product line-ups at cheaper prices,” Lee Ji-young, a researcher at LIG Investment & Securities said.

Overseas businesses also can be considered as a long-term investment to study potential customers, Lee explained, because foreign direct purchases from overseas to Korea have been growing recently.