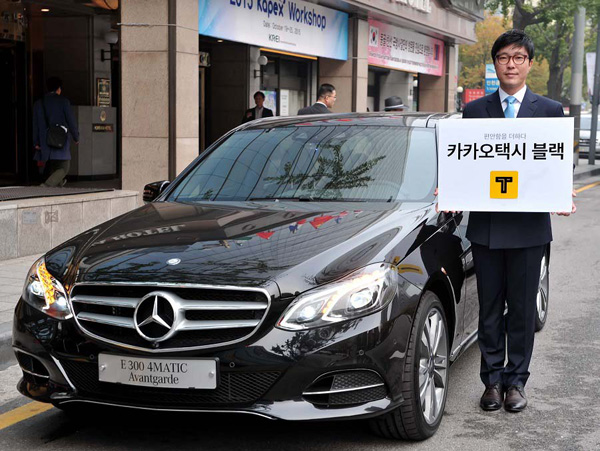 A Kakao employee holds up a sign that reads “Kakao Taxi Black” next to a Mercedes-Benz vehicle. [KAKAO]

Kakao announced Tuesday it will launch Kakao Taxi Black, its premium taxi service, in Seoul in as few as 10 days.

The move comes seven months after Kakao, the operator of the nation’s most popular messenger KakaoTalk and second-largest portal site Daum, debuted the Kakao Taxi app, which enables users to request taxis through their smartphone.

As part of the new service, 100 large-sized luxury vehicles all Mercedes-Benz or BMW models ? will take passengers for a base fee of 8,000 won ($7) plus additional charges according to travel distance and time.

Kakao Black taxis will be equipped with bottles of mineral water and smartphone chargers. The formally trained drivers will receive a monthly salary of over 3 million won, and will wear suits.

The company said the luxury cars won’t have the three conventional features of an ordinary taxi: meter, payment device and cab light outside the vehicle. Payments will be made on the Kakao Taxi app, in which the customers will have entered their credit card information.

The feature is inevitably reminiscent of Uber, an app from a U.S. start-up that first connected riders to drivers.

“Kakao Black has added comfort to the Kakao Taxi, which has established itself in the past seven months as a service that customers can trust,” said John Jung, chief business officer in charge of the taxi service at Kakao, in a press conference on Tuesday. “We aim to create a brand-new taxi service market in tandem with the rising demand for the high-end service.”

Jung added the Seoul Metropolitan Government is in the final stage of approving the service.

Kakao Taxi Black also involves two other groups: the Seoul Taxi Association, which will purchase and manage the vehicles and hire drivers, and High End, a private company responsible for training and overseeing the drivers. The company is a subsidiary of Korea Smart Card, the developer and seller of the ubiquitous public transportation card T-money.

Kakao will receive commissions for connecting taxis and customers, which will be the app’s first profit engine.

Kakao Taxi was initially met with skepticism, as it provided its services for free.

Since the app’s debut on March 31, its number of users has risen dramatically, attracting 5.5 million with an average 500,000 calls per day.

Uber Korea welcomed the new Kakao service, saying in a statement it is “excited that other players also see the opportunity to provide more, better transportation options.”

Uber had to shrink services in Seoul after facing legal and regulatory hurdles.