Lotte scion told to get out of hotel

Lotte scion told to get out of hotel 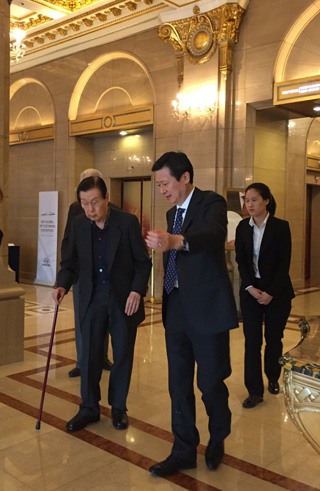 The family feud at Lotte Group is coming close to home after vanquished older brother Shin Dong-joo was told to vacate offices and a living place in the landmark Lotte Hotel in central Seoul.

Lotte Hotels & Resorts on Tuesday notified the oldest son of founder Shin Kyuk-ho that he and his staff had to leave an office and living space on the 34th floor of the hotel because they interfere with the work of the group.

The founder and his eldest son live in the hotel in Myeong-dong, central Seoul, and use it as offices from which they continue to fight to regain control of the conglomerate, which operates both in Korea and Japan, from younger son Shin Dong-bin.

The tussle is the latest chapter in the prolonged fraternal dispute at Lotte. Founder Shin Kyuk-ho has not been asked to vacate his residence at the hotel.

Shin Dong-bin took the helm of the group’s Tokyo-based holdings company in July after stripping his older brother of his vice chairmanship of Lotte Holdings.

Shin Dong-joo claims Dong-bin’s control of Lotte Holdings is illegitimate and has launched legal actions against his younger brother.

The move to remove Dong-joo from the hotel came a day after the founder fired a chief secretary for Shin Kyuk-ho who was appointed by Lotte Group.

His job was to manage the schedule of the founder and accompany him whenever he goes outside.

SDJ Corporation, a unit that represents the older son, said that Shin Dong-joo’s aides are now taking care of the nonagenarian patriarch, and the chief secretary appointed by the group wasn’t needed.

“The decision to hire and fire should be done by the group, not an individual outside of the group,” Lotte said in a statement.

Song Yong-dok, CEO of Lotte Hotels & Resorts, explained why the hotel told the oldest brother and his staff to vacate. “As the head of the hotel, I couldn’t just stand by when outside people barricade a whole floor of the hotel,” said Song.

Shin Dong-joo has launched a legal battle in both Japan and Korea to contest the decision to dismiss Lotte Group founder Shin Kyuk-ho from the board of the holding company.

Shin Dong-joo also filed a damages suit in Korea against Hotel Lotte, seeking 1.2 billion won ($1 million) for the ousting of the founder.