Thin, flexible batteries ahead of the curve

Thin, flexible batteries ahead of the curve 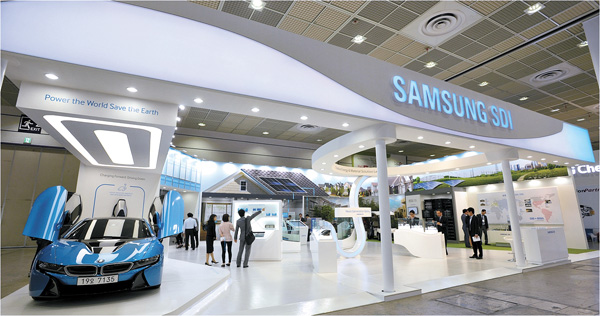 Samsung SDI on Tuesday introduced a new generation of slim, bendable lithium batteries that could give the company a significant foothold in the wearable digital device market.

As wearable technology is no longer science fiction and is being quickly developed and applied to gadgets in everyday use, the global race for innovative batteries to support devices has escalated.

The biggest challenges for battery manufacturers has been to make small yet long-lasting batteries that are also slim and flexible so they can be applied to wearable products.

“The era of the wearable battery, which can be applied to any curve of the human body is now in reach, thanks to the Stripe battery and Band battery,” said a Samsung SDI official.

According to the company, the Stripe Battery is the next generation lithium battery that is flexible yet slim with high-energy density that can be applied on any wearable object, from necklaces to hairbands and T-shirts. The company said it has succeeded in slimming the thickness of the battery to 0.3 millimeter and has increased the energy output.

“The Stripe battery will act as a catalyst on various battery application markets including wearables,” said the Samsung SDI official. 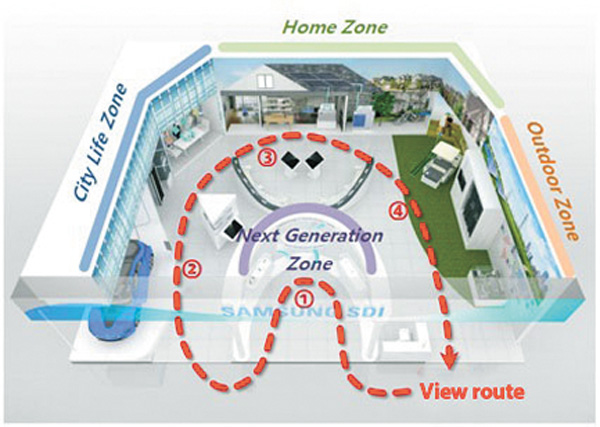 Map of the company’s booth

The company said the Band battery, which is embedded in the band of the smartwatch, has a 50 percent increased capacity.

The batteries were displayed during the three-day Energy Plus Expo and Summit exhibition that started Tuesday. The exhibition, held at COEX, Gangnam southern Seoul, and hosted by the Ministry of Trade, Industry and Energy, is divided into three sectors - Inter Battery, Seoul International Electric Fair and the Korea Smart Grid Expo. Samsung SDI opened up a booth at the exhibition under the them BoT (battery of things) and divided into four themes - City Life Zone, Home Zone, Outdoor Zone and Next Generation Zone.

Samsung SDI held 20.5 percent of the global market share, a position it has kept since 2010. Samsung SDI started its lithium-ion battery business in 2000. The second lead was taken up by Korean company LG Chem with a 15.9 percent market share.

The report added that China, Korea and Japan held the largest market share with China ranking top with 39.9 percent followed by Korea with 36.6 percent and Japan with 23.7 percent. 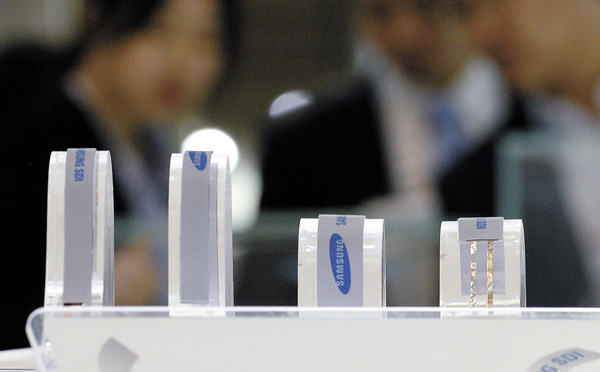 Although Samsung SDI holds the largest share by an individual company on small-sized batteries, when it comes to wearable batteries Chinese company Lishen holds the biggest stake.

According to market research company B3, Lishen held the largest market share on wearable batteries with 40.15 percent followed by another Chinese company ATL with 23.62 percent. Samsung SDI’s market share was only 7.09 percent and LG Chem 1.57 percent.

The flexible battery market is expected to expand in the coming years, according to IDTechEx Research, which estimated the market would grow from $6.9 million in 2015 to over $400 million by 2025 as global demand and Internet of Things (IoT) devices will require thinner, lighter, more flexible batteries with high energy density.