Hwang tried to get to the U.S. for his safety’s sake

Hwang tried to get to the U.S. for his safety’s sake 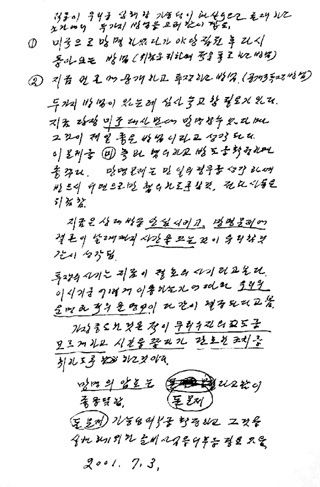 The late Hwang Jang-yop, the highest-ranking Pyongyang official to defect to South Korea, considered setting up a North Korean government-in-exile in Washington after gaining asylum there. In July 2001, Hwang, the architect of North Korea’s Juche(Self-reliance) ideology, tried to secure political asylum through the U.S. Embassy in Seoul, just four years after his defection to the South, revealed his former aide Kim Dok-hong, a North Korean businessman, in an exclusive interview with the JoongAng Ilbo published on Monday.

Hwang felt threatened by the Kim Dae-jung administration and its National Intelligence Service (NIS), according to Kim, which had deepened ties with Pyongyang through the so-called Sunshine Policy. He actually feared for his life, Kim said.

For the first time Kim revealed to a newspaper a letter Hwang wrote to him talking about asylum in the U.S. and dated July 3, 2001. “If I can seek asylum with the U.S. Embassy right now, that would be the best method,” Hwang wrote. “I hope this issue can be negotiated with the United States and a means can be confirmed.”

Hwang continued, “Just in case, should there be any negotiations on the asylum application issue, it should only be done in written form - using the phone is too dangerous.”

He also insisted on using a code name, “money problems,” for the asylum application process, and wrote, “After confirming the possibility of the ‘money problem’ project, there is a need to hurry with preparations to realize it.”

Then-President Kim Dae-jung was working on maintaining an amicable atmosphere with Pyongyang, and the first inter-Korean leaders’ summit with North Korea’s Kim Jong-il was held in June 2000.

Hwang, a former North Korean Worker’s Party secretary in charge of international affairs, defected to South Korea in 1997 with his aide, Kim, an official with the Workers’ Party.

Shortly before, Hwang had started to fear for his safety in North Korea after he made the mistake of saying publicly that he originally created the Juche, or self-reliance, ideology rather than North Korean founder Kim Il Sung and his son Kim Jong-il.

On his way back from a trip to Japan, where he spoke at a conference on Juche, Hwang went to the South Korean Embassy in Beijing on Feb. 12, 1997 and applied for political asylum.

On April 20, 1997, Hwang and Kim arrived in South Korea and were welcomed by the Kim Young-sam government.

In Kim Dok-hong’s newly released memoir, “I am a Liberal,” published Monday, he describes a scene on July 2, 2001 when then-NIS Director Shin Kun summoned Kim to his residence in the premises of top spy agency at 11 p.m.

Kim claims in the book, “Director Shin at that time opposed former Secretary Hwang’s visit to the United States, which was in the works at that time, and threatened that ‘he could be assassinated.’”

Hwang wrote the letter requesting asylum from the U.S. Embassy the next day.

Hwang described the NIS as the “enemy” and said, “There is a real possibility that the enemy may kill us.”

Hwang considered setting up an anti-Kim Jong-il government-in-exile in Washington if he was granted asylum by the U.S. government.

Multiple sources said that Hwang considered setting himself up as the head of this provisional North Korean government in the United States.

But Hwang’s attempt to seek asylum in the United States was discovered by the NIS, and his contact with Kim Dok-hong was severed. Hence such plans never came about.