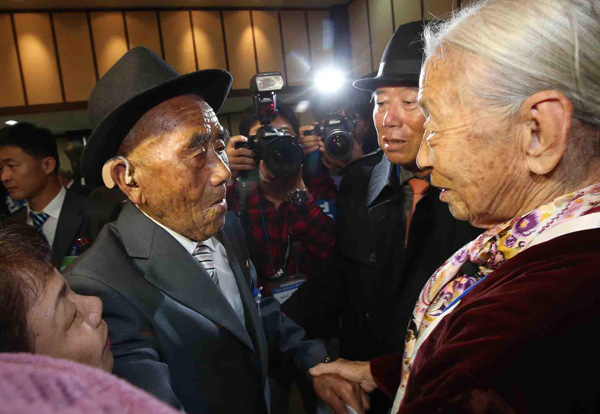 Lee Sung-kyu, right, is reunited with her husband Oh In-se for the first time in 65 years after they were separated by the outbreak of the Korean War at the reunion center at Mount Kumgang in North Korea during the inter-Korean family reunions on Tuesday. She was accompanied by their son Oh Jang-kyun, who had never met his father before. [JOINT PRESS CORPS]

The long-awaited reunions of some 530 members of 96 families separated for over six decades following the Korean War (1950-53) kicked off Tuesday at Mount Kumgang in North Korea in a flurry of tears of joy and sorrow over the time together stolen from them.

Lee Sun-kyu, from Cheongwon County in North Chungcheong, was separated from her husband Oh In-se in June 1950 at the outbreak of the war. She was just 19 years old.

Lee was one of 389 South Korean participants eager to reunite with 141 North Koreans at the reunion center on Mount Kumgang at around 3:20 p.m.

Some were anxious over whether they would recognize the faces of a child, spouse, sibling or parent after more than half a century had passed, in the first round of the 20th inter-Korean family reunions that will run until Thursday.

Lee, now 85, was accompanied by her and Oh’s son and daughter-in-law. Her eyes swelled with tears upon seeing her 83-year-old husband in a gray suit, a fedora hat and hearing aids.

Their 65-year-old son Oh Jang-kyun uttered the salutation “Father” for the first time in 65 years.

“I tried to live proud to be your son,” said Oh, who was born during the war and never knew his father in North Korea. “We look alike.”

His father beckoned him, said, “Come nearer,” and stroked his son’s face. It was their first conversation.

Jang-kyun and his wife proceeded to give a deep bow to his father, a sign of respect to elders.

For 37 years, Lee thought her husband was dead and even conducted memorial services for him every year.

“We only lived six months and 20 days together,” she lamented, “and then we waited for another 65 years.”

She recalled how her husband disappeared one day in 1950. “There was some training that was supposed to last 10 days, so my husband went and never returned home.”

Lee Jin-gu, 87, was beaming all the way on her journey from Sokcho, Gangwon, to the North, eager to be reunited with her younger brother Ri Yong-gu, 85. She wept hard in his arms when they were finally reunited.

In the course of the three-day reunion, the families, despite all the decades spent apart, will have a mere 12 hours of face time through six events before the time to separate comes again on Thursday morning.

At 8:30 a.m., Unification Minister Hong Yong-pyo saw off the South Korean delegation, including a support team of Red Cross and government officials, 20 medics and 29 reporters, who departed from Sokcho, where they gathered and registered on Monday.

Some of the elderly participants initially selected to partake in this round of reunions were eventually not able to make the journey.

The group departed on 33 buses accompanied by five ambulances.

Nam-dong went missing at the start of the war. When they were finally reunited, Kim Nam-dong asked, “Is that really my brother Nam-kyu?”

The first of two family reunions scheduled for this month is the first in 20 months.

After an inter-Korean leaders’ summit in 2000, the first round of family reunions took place in August of that year.

Due to the division of the peninsula, the relatives have had no means of communicating with each other and are banned from crossing the border to see each other - except through these government-approved meetings.

South Koreans who want to partake in reunions have to be lucky in a computerized lottery system. In contrast, the North Korean government selects the people who get to attend from its side, reportedly favoring people loyal to the regime.

Though South Korea has pushed to regularize the reunions, they remain infrequent and are hostage to the state of ties between North and South. Pyongyang in the past has often used the reunions as a bargaining chip.

Analysts point out that overly frequent reunions could raise discontent amongst the North Koreans who attend. They are a window for them to witness the comfortable and more affluent lifestyles of their South Korean relatives.

There were over 134,000 South Korean applicants registered for family reunions, of which only half, or 66,488, are alive, according to the Ministry of Unification.

Some 54 percent of the survivors are over 80 years old.

This round of inter-Korean family reunions followed a breakthrough deal between Seoul and Pyongyang on Aug. 25 that eased military tensions between the two countries following a land mine explosion in the South that maimed two soldiers. The deal called for boosted civilian exchanges and resumption of the reunions.

Working-level talks proceeded smoothly in September, and North Korea did not conduct a long-range missile test for its Workers’ Party anniversary earlier this month as it has hinted it might, enabling the reunions to go ahead. A second round of reunions involving 90 inter-Korean families will be held from Saturday to Monday.