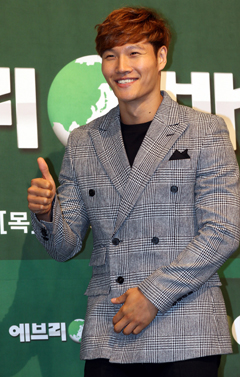 Singer Kim Jong-kook has signed with a new entertainment agency.

His previous contract recently expired, and Kim, who has a wide fan base in China, once told the media that he would launch his own agency.

But he joined hands with Maroo Entertainment, which represents the K-pop act Supernova, also known as Choshinsung.

“The head of the entertainment agency and Kim have known each other for so long, and Kim decided to work with him,” the agency said in a press release on Wednesday.

The agency added that it will fully support Kim so that he can continue to actively work in both Korea and China.

Kim debuted in 1995 as a member of the dance duo Turbo. The duo broke up in 2001, but Kim released solo albums and successfully transformed into a solo musician, though he has taken a break from his main career since 2012.

Instead, he has been appearing on reality TV shows like “Running Man” and “Escape Crisis No. 1.” Thanks to the huge popularity of “Running Man,” Kim said he spends most of his time performing in China.