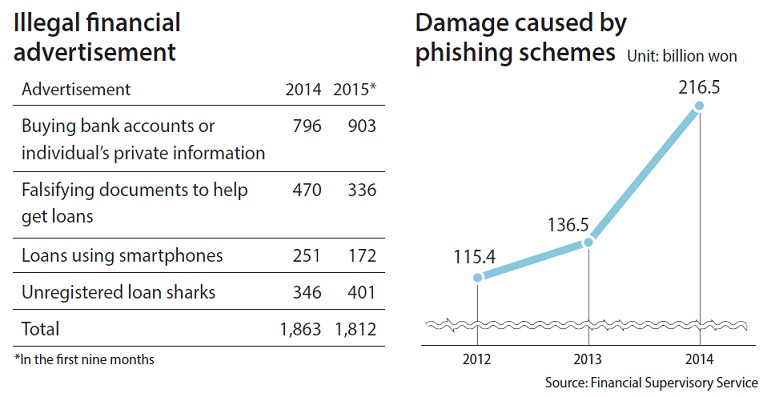 When an unidentified man in his mid-30s needed 1.5 million won ($1,317) in July, he began scouring the Internet for options. He stumbled on an ad that promised “immediate loans possible,” but when he called, he was told his credit score was too low to receive a legitimate loan.

But then, the voice on the other end of the line added that there was another way.

The man met several people at a motel, where they created a false employment certificate for him to use in loan applications.

Frightened by the idea, the man tried to back out - and fell into deeper trouble.

The group told him he’d already broken the law and forced him to follow through with the plan. He applied for loans through 10 different financial companies, including a savings bank, and was eventually able to receive a total 32 million won, of which the document fabricators took 18 million won.

The case is one example of the ways in which illegal advertisements are used to defraud both banks and customers, a trend that continues despite financial regulators’ efforts.

According to the Financial Service Commission on Wednesday, there were 1,812 illegal financial advertisements spotted in the first nine months of this year - almost the same as the 1,863 cases that were reported during the same period last year.

Advertisements used in voice phishing schemes that lead to the acquisition of an individual’s bank account or personal information were the most common, with 903 ads caught, growing 13.4 percent compared to the same period last year. The advertisements were posted in online communities and on blogs.

The advertisements are sometimes used to trick people into giving up their account numbers or personal information, but in other cases, people willingly offer the information - either their own or that of others - for a price.

Personal bank accounts, debit cards or banking security cards are usually purchased for between 1 million won and 2 million won. Pieces of personal information are worth between 30 won and 50 won. Those accounts and information are then used in other fraudulent schemes, making them harder for authorities to crack.

By law, anyone who sells their bank account can be imprisoned for up to three years or fined as much as 20 million won. Those convicted are also restricted from opening a bank account and denied access to online, mobile and telebanking for a year.

The second-most common illegal ads were for loans from unregistered loan sharks, with 401 ads - an increase of 15.8 percent year-on-year. These loan sharks operated under the name of another loan provider or company that has gone out of business.

The advertisements for companies that falsify documents to help those with low credit score to get loans shrunk 28.5 percent compared to last year, with 336 ads.

In these cases, even if the borrower is able to receive loans thanks to the documents, he or she often has to pay the company 50 to 80 percent of the money received as commission.

In some cases, the perpetrators take the entire loan and go into hiding, threatening to reveal that the victim has also broken the law if they attempt to go to the authorities.

The advertisements propose lending cash in exchange for payments made via smartphones.

The loan receiver would purchase cyber money and game items through their smartphone, which is then sold to another party while they receive cash. The loan provider pockets 30 to 50 percent of the payment as commission.

“We will continue to perform our promise to eradicate evils in the financial industry and work with local governments to crack down on illegal advertisements,” said an FSS official.