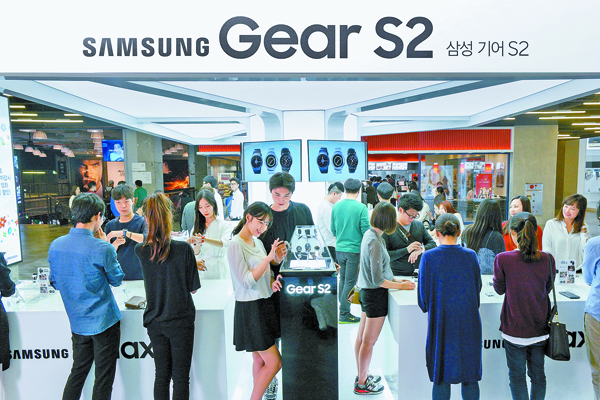 Shoppers try out the Gear S2 at a showcase stand in COEX in southern Seoul. [SAMSUNG ELECTRONICS]

Samsung Electronics is selling an average 2,000 units per day of its latest Gear S2 smartwatch, approximately twice as many as its predecessor, industry sources said on Wednesday.

Although a Samsung Electronics spokesperson declined to reveal an exact figure, he confirmed the total was largely in line with the number first quoted by Yonhap News Agency.

Of the three models, the Gear S2 3G, sold exclusively by SK Telecom, turned out to be the most popular, selling an average 1,000 per day. The Gear S2 Classic and the standard Gear S2 sold about 1,000 more.

The S2 Classic is more popular, and out of stock in many stores, apparently due to its design, which is similar to traditional watches. 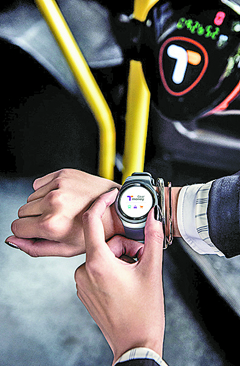 A user activates the T-Money system to pay transportation fares with a Gear S2. [SAMSUNG ELECTRONICS]

“Consumers preferred the Classic model during the preorder session,” the spokesperson said. “I think its design, which seems like a chic watch, not a bulky gadget, appealed to many consumers.”

The Classic model currently is selling at above its release price at second-hand malls and in the online community since it sold out in major telecom providers’ online malls.

The new timepieces boast a number of advanced features, though the limited availability of an app for the Tizen operating system is considered a weak point.

Despite this, many analysts consider the Gear S2 is a step up from its predecessor, the Gear S.

On top of the array of wearable sensors such as an accelerometer, gyroscope and heart-rate monitor, Samsung will likely offer Samsung Pay on the watch later, according to multiple media reports.

The latest model is fitted with hefty batteries that last two to three days, which Samsung claims outlive Apple’s smartwatch.

The reaction of the Galaxy S2 is important because it shows consumers’ response to Samsung’s own operating system.

The platform shifted from Android to Tizen in May 2014 through a software upgrade. Tizen is based on the Linux kernel, which was jointly developed by Samsung, Intel, Tizen Association and Linux Foundation.