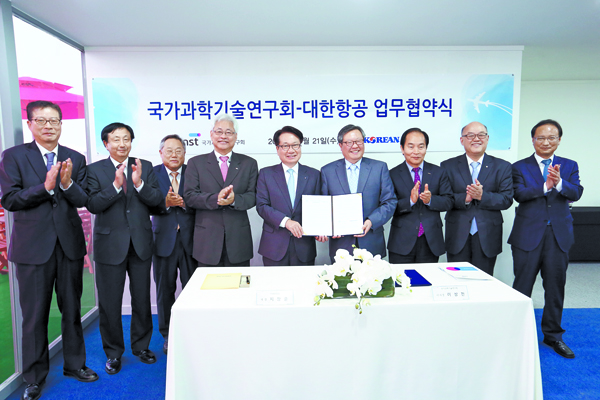 Korean Air President Ji Chang-hoon, center left, poses for a photo with Lee Sang-chun, the chairman of the board of directors, after signing an agreement on the development of unmanned aerial vehicle (UAV) on Wednesday at Seoul Air Base in Seongnam, Gyeonggi. [KOREAN AIR]

Korean Air (KAL) is joining with the government to develop new high-end technology for drones.

The nation’s leading carrier said Wednesday that it had signed an agreement with the state-run National Research Council of Science & Technology (NRCST) during the 2015 Seoul International Aerospace & Defense Exhibition at Seoul Air Base in Seongnam, Gyeonggi. Through the deal, KAL will cooperate in the development and commercialization of technologies for unmanned aerial vehicles (UAV).

KAL is a leader in the drone business. It successfully developed the KUS-9 surveillance UAV in 2009 after launching its predecessor, the KUS-7, in 2007. The company is also working on developing a vertical take-off and landing stealth UAV and pilotless helicopters, as well as unmanned fighter jets.

Under the agreement, the NRCST will transfer its intellectual property rights related to UAVs that are currently owned by state-run agencies to KAL to commercialize research work.

The company said the two parties agreed they have to commercialize UAVs as soon as possible since drones have become important devices in both commercial and military use.

The U.S. Air Force aims to operate 50 percent of its fighter jets without pilots starting in 2026, according to the company.