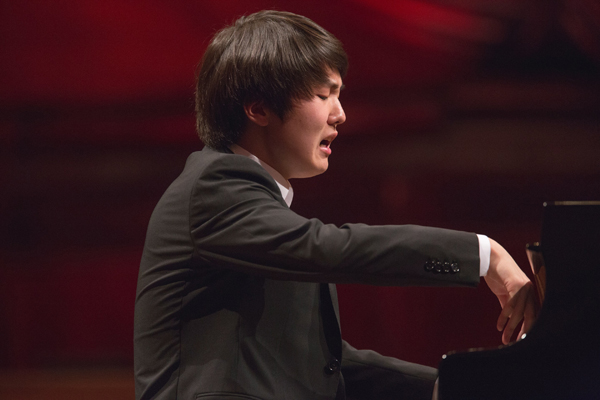 Korean pianist Cho Seong-jin came in first place at the 17th International Chopin Piano Competition in Warsaw. The 21-year-old is the first Korean ever to win the top prize at the prestigious competition.[INTERNATIONAL CHOPIN PIANO COMPETITION]

Pianist Cho Seong-jin, 21, became the first Korean ever to win the prestigious International Chopin Piano Competition. On Wednesday, the organizer named Cho the winner of the 17th edition of the competition, which was held from Sunday to Tuesday in Warsaw.

Cho will receive 30,000 euros ($33,600) and a gold medal as the first prize recipient, along with an additional 3,000 euros for also winning the special prize, the Fryderyk Chopin Society Prize, which goes to the best performance of a polonaise.

For the final round of the competition, Cho performed Chopin’s Piano Concerto in E minor, Opus 11. Second prize went to Charles Richard-Hamelin from Canada, and third place went to Kate Liu from the United States. A total of 160 young pianists participated in the preliminary round, and 78 from 20 countries competed in the final.

Before Cho’s win, the Korean pianists with the highest scores in the competition were the two brothers Lim Dong-hyek and Lim Dong-min, who shared third place in 2005.