Hazardous haze is attributed to China and two typhoons

Hazardous haze is attributed to China and two typhoons 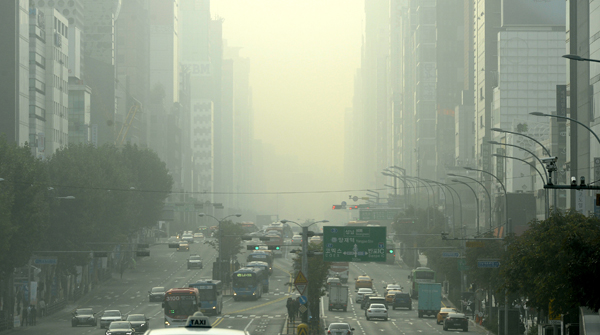 A noticeable haze descended over Korea this month and local environmentalists say much of the pollution can be sourced back to China’s heavy industries and two typhoons hovering over waters near Japan and Taiwan.

The country’s weather office issued 11 fine particle warnings across the country this month alone; Gyeonggi had the most with four, followed by Incheon with three, North Chungcheong with two and Ulsan and North Gyeongsang with one each, according to data provided by the National Institute of Environmental Research.

No such warnings were issued in October 2014. 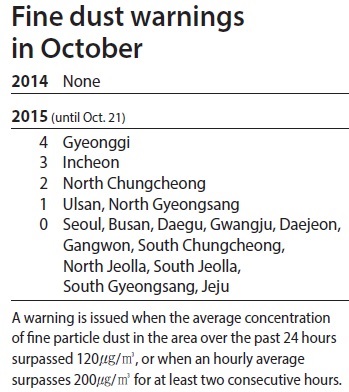 The average fine particle concentration this month throughout the country was 44.3 micrograms per cubic meter; the corresponding figure for last year was 36.4.

“China’s dust storm is supposed to blow ‘through’ Korea on the westerlies,” said Lee Jae-beon, a researcher with the National Institute of Environmental Research.

“A typhoon hovering over [waters] south of Japan [is blocking that process], creating a huge amount of dust particle pollution in Korea,” Lee continued, referring to Typhoon Champi.

As to why Gyeonggi has been affected the most, local pundits mentioned the area’s dense factory zones, saying their pollutants have added to the dust storm from China’s heavy industries located hundreds of miles away.

Ban Gi-seong, who heads the weather forecast center at KWeather, a broadcaster under the Korea Meteorological Administration, also pointed to the lack of rain in recent weeks.

“There’s not enough rain to wash away the fine dust particles,” he said.