Relatives get some precious private time

Relatives get some precious private time 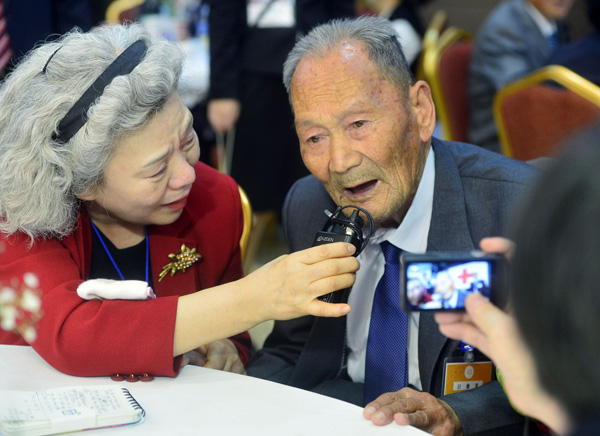 South Korean Lee Jeong-suk, 68, holds a microphone to Ri Heung-jong, her 88-year-old father from the North, to record him singing on Wednesday. The father and daughter met for the first time in some 60 years at Mount Kumgang. [JOINT PRESS CORPS]

The second day of reunions of Korean families torn asunder for over 60 years brought a flurry of gift exchanges and quality private time among loved ones, as Pyongyang went all-out to emphasize the happiness and well-being of its people taking part in its state media.

On Wednesday, 389 South Koreans and 141 North Koreans from 96 families separated by the 1950-53 Korean War continued the three-day reunions at Mount Kumgang in North Korea, spending the morning in private time at the hotel without the media.

The North’s official Korean Central News Agency (KCNA) extensively reported the first day of reunions on Tuesday. “Our participants told their South Korean family members how they are with their families enjoying a happy and worthwhile life under our socialist system,” it said.

The North’s official Rodong Sinmun on Wednesday reported, “The occasion of the reunions where families finally met - a scene often envisioned following the tragic fragmentation of the same people because of foreign powers - brought joy and a yearning for unification.”

In addition to emphasizing that North Korean citizens were happy and satisfied, state media also played up its leadership’s role in bringing around the reunions and pressed its vision for unification.

Another Wednesday KCNA report was self-laudatory, saying, “The reunion of the families divided between the North and South came about as a result of our leadership and our deep feelings for fraternity, and is drawing great attention from the international community.”

The families had two hours in the morning to share more feelings and memories after the heartfelt and teary greetings the previous day. They were all aware that time was ticking away on what was probably their last chance to see each other.

Many gifts were exchanged. Winter apparel, including down jackets and thermal underwear, were popular gift items from the South Koreans to their family members in the North, along with medicine and vitamins.

The two sides agreed beforehand that South Koreans could give up to $1,500 in cash and gifts weighing up to 30 kilograms.

The North Koreans prepared a standard gift of various liquors and scarves.

Some South Koreans came as messengers for those who had died.

Kim Tae-ho, 79, brought an old blanket to his 81-year-old cousin in the North, Kim Tae-suk. It was left by Tae-suk’s mother, who died without being able to see her daughter in the North, leaving behind instructions in her will, “Please don’t throw this blanket away and give it to Tae-suk.”

After private time, families gathered in a group meeting in the afternoon leading to their bittersweet last dinner together, where they were served by eye-catching young North Korean beauties in rainbow-hued hanbok, or Korean traditional dress.

While there were touching stories the first day of reunited spouses and parents and children, such reunions were, in fact, few in number.

This time around, there were only five families in which spouses or parents and children were reunited.

Some other reunions were among siblings. But most, like the case of Kim Tae-ho, were between more distant relatives or representatives of people who had died.

That was in large part due to the six decades that have passed since the division of Korea and the large amount of separated relatives who have died. North Korea has a considerably lower life expectancy than South Korea, and few survive past 90 years old.

North Korea’s average life expectancy according to the World Factbook is 70, a decade lower than the South’s, which is 80.

There were over 134,000 South Korean applicants registered for reunions, of which only half, or 66,488, are still alive, according to the Ministry of Unification here.

South Korean selects participants through a lottery system, and analysts estimate that each year around 4,000 people on the list die from old age.

Lee Min-hee, 54, felt nearer to her elderly uncle from the North after spending another day together. “It was definitely more relaxed speaking alone in the room. But we only had two hours to ourselves, which was regrettable. I told my uncle to register for the reunions again next time.