Han fights back from assault with shame

Han fights back from assault with shame 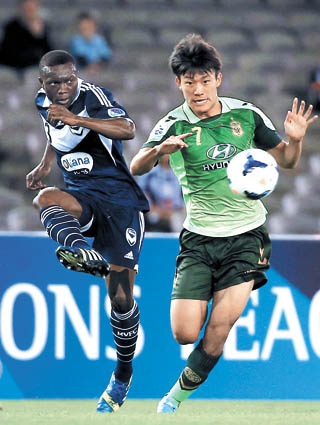 Midfielder Han Kyo-won is slowly returning to his normal performance level today, although a devastating mid-game assault five months
ago might never be erased from his memory.

In a K-League Classic match on May 23 against his former club Incheon United, 25-year-old Han lost his temper after a tussle and punched defender Park Dae-han.

The K-League discipline committee slapped Jeonbuk Hyundai Motors player with a 6 million won ($5,272) fine and suspended him for six matches, while his club punished him separately, handing him a 20 million won fine and 80 hours of community service.

For football fans, it was shocking incident in only the 5th minute of the game. Han had a polite, respectful image while he progressed through the local football scene and eventually won a place on the national team.

In an interview with Ilgan Sports, an affiliate of Korea JoongAng Daily last Monday at Jeonbuk’s club house in Wanju County, North Jeolla, Han looked back on the regretful incident.

Han has returned to his home ground after serving his punishment, but says the incident still brings him shame and painful moments.

“It’s my fault and mistake, so I had to bear it,” he said. “But what really gave me pain was that my family was also suffering. Because of me, many people suffered as well.”

Han says his parents gave him the most support. After the on-field assault, he called his parents immediately to explain what had happened, but it was too late to correct what he had done.

“They have been telling others that I’m a national team member, but because of my behavior they didn’t go outside, they just stayed home,” Han said. “They know my life is all about football, and they were concerned that my career would end. I just feel so sorry for my parents.”

Han’s career has followed a rags to riches pattern. While some players in the K-League Classic have taken elite courses to become professional
footballers, Han has risen from the
bottom.

After graduating from Chungju Commercial High School, Han planned to go Chosun University, but failed to make the grade athletically. He later went to Chosun College of Science Technology, but since the school is not a famous football school, advancing onto the professional stage seemed unreachable.

However, Huh Jung-moo, then Incheon United coach, watched Han in some U-League matches and later selected him in the 2011 rookie-draft. This made Han the first Chosun College of Science Technology alumni to become a professional footballer.

Han had 15 goals and six assists in 93 matches with Incheon over three seasons. After an impressive performance with Incheon, he moved to three-times K-League champions Jeonbuk in 2014 and helped them win the championship.

In August, 2014, Han was selected as a national team member and was in the final squad for the 2015 Asian Cup this January.

“I also thought maybe this incident happened because I rushed too much to reach this level,” he said. “Although I didn’t notice, maybe I was too focused on only winning and got lost in myself.”

Han said he was afraid of the reaction he might get when he returning to the ground on July 8 to play against Gwangju FC. But he said as soon as he stepped onto the pitch his heart was lifted by the supportive reaction of the fans.

“Fans chanted my name when I stepped on to the pitch,” he said. “It’s not easy to feel your heart has been moved. I just felt so sorry to my fans [for what I had done] and my only thought was to perform well.”

“Since I experienced the national team, I now have confidence,” he said. “It’s different from the past when I just had an ambiguous goal of playing.”

Han said his current focus, however, is to help Jeonbuk defend its K-League title. Under the league’s split system, Jeonbuk is in the upper group and on top of the standings with 68 points. However, the team is in a slump after losing the last two matches.

With only four matches left in the regular season, Jeonbuk is chased by No.2 Suwon Samsung Bluewings by eight points in the league standings. Jeonbuk’s next match is against FC Seoul on Sunday.

“My incident had a negative effect to my team,” he said. “For the rest of matches, I will play with a do-or-die mindset to win the championship. I want to deliver more to the team than the damaged I inflicted.”