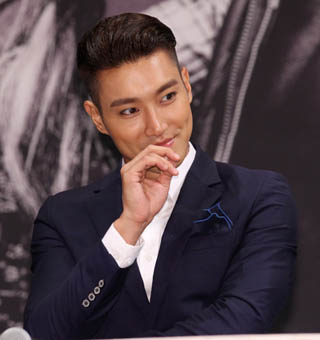 According to The Tick Tock, a public relations agency promoting the drama, the acoustic ballad song titled “Only You” is used as a theme for Choi’s character, Kim Shin-hyuk.

“Only You” appeared for the first time in Wednesday’s episode and was ranked No. 1 on major music portals upon its release on Thursday.

As a magazine reporter who has a crush on Kim Hye-jin, a lead female character played by Hwang Jung-eum, Choi has received rave reviews from critics and viewers alike for his comical performance.

Although he debuted as a member of the K-pop boy group Super Junior in 2005, the 28-year-old singer-actor began acting a few years ago and has appeared in many Chinese films and drama series, such as “Helios” (2013) and “Dragon Blade” (2015), in which he teamed up with Hong Kong action star Jackie Chan.

After finishing “She Was Pretty,” Choi will join the Army on Nov. 19.

When a series earns more than 15 percent of viewership, it is considered a huge hit.