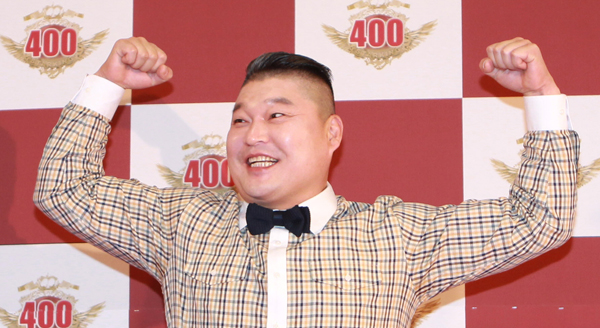 Comedian and TV show host Kang Ho-dong will launch a new show on JTBC by joining hands with the former producer of “Knee-Drop Guru,” the talk show that made him a superstar.

JTBC said on Thursday that Kang and his long-time partner, Yuh Woon-hyuk, a chief producer at JTBC, are in discussions to make a new show, but the broadcaster said it can’t comment on further details.

Kang and Yuh worked together on “Knee-Drop Guru” from 2006 to 2011, the heyday of the 45-year-old TV celebrity’s career. Many viewers jokingly said Kang was on every time they turned on the TV.

But in 2011, the wrestler-turned-comedian became embroiled in a tax-evasion scandal. He was later cleared of charges, but he took some time off from TV. After a one-year hiatus, Kang returned to the small screen, but his shows have not been as popular as they used to be.

He is currently hosting a couple of variety shows, including “Star King” and “Our Neighborhood Arts and Physical Education.”

Kang used to be a top sirreum (Korean wrestling) wrestler, but he retired in 1992 and successfully transitioned into comedy. 