Firm in row over delivery vehicles

Firm in row over delivery vehicles 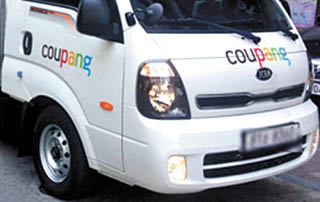 An e-commerce company is facing an injunction by a trade association over accusations that it is using vehicles not registered for business use to deliver products.

Coupang started a “Rocket Delivery” service in March, where packages of goods worth 9,800 won ($8.60) or more are sent to customers in 24 hours.

“Coupang so far has illegally shipped its goods with unpermitted vehicles, unlike the local logistics industry which ships goods with business-use cars that are permitted by the Trucking Transport Business Act,” the association said.

Companies or individuals in the shipping business have to deliver goods using trucks with yellow number plates, which are granted by the Ministry of Land, Transport and Infrastructure after business registration, according to the Transport Business Act.

Coupang has responded by saying that its Rocket Delivery service is not an official delivery business because it doesn’t charge a shipping fee. The trade association says, however, that Coupang’s service is a paid shipping service because the shipping fee is reflected in product prices. 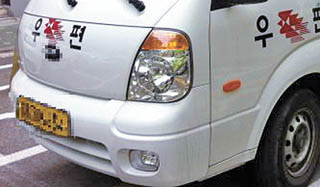 Coupang said it is planning to expand the express delivery service by building a nationwide logistics network with some 1,100 trucks and 3,000 delivery agents.

The Korean government limits the number of commercial truck licenses as part of efforts to prevent excessive competition.

A commercial truck owner said, “Truck driving licenses trade at prices ranging from 10 million won to 20 million won because it’s just too difficult to get one.

“Sometimes, the trucks’ number plates are traded at a more expensive price than actual trucks.”

The association says that illegal shipping activities where drivers use personal cars are rising.

“The association estimates that there are more than 8,000 personal vehicles illegally shipping goods due to the shortage of licensed commercial shipping trucks,” said Bae Myung-soon, the secretary general of KILA. 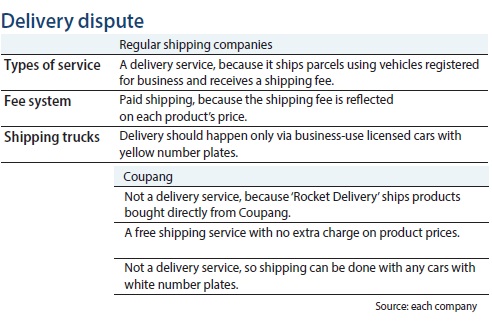 “As the service barriers disappear among sectors, it is not an important issue if a company with shipping service has a logistics business license,” said Kang Jeong-hwa, chairperson of the Consumers Union of Korea. “The
government should revise the legislation to promote the consumers’
convenience.”

The Ministry of Government Legislation has yet to decide whether Coupang’s Rocket Delivery service is illegal or not.

KILA says the government should prepare a separate legislation for delivery services.

“The government should grant more licenses to trucks smaller than 1.5 tons, in order to reduce the delivery crisis in Korea,” KILA said.

“It should promote the delivery business into a value-added shipping industry by setting up a separate law for the delivery industry and
clarifying the definition of a delivery service.”