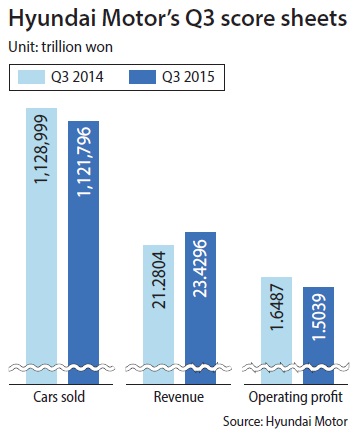 Operating profit for Hyundai Motor fell for the third consecutive quarter, mainly due to weak foreign currencies in European and emerging markets.

In a regulatory filing from its Yangjae-dong headquarters in southern Seoul on Thursday, the nation’s leading automaker announced that operating profit for the third quarter fell by 8.8 percent from a year ago to 1.5039 trillion won ($1.321 billion), which was a bit lower than market expectations. It was also the lowest since the fourth quarter of 2010, when the company reported 1.24 trillion won.

“We expected to enjoy the impact of a strong won against the U.S. dollar, but it was offset as currency values of the euro and newly industrialized nations [such as Russia and Brazil] declined,” said Lee Won-hee, the chief financial executive of Hyundai Motor. “The overall business operating cost spent to strengthen our marketing and sales, including the money we paid to dealers abroad as incentive, increased under intense competition with rivals.”

In dollar terms, revenue for the third quarter rose by 10.1 percent to 23.4296 trillion won from a year earlier.

But it is still questionable whether the company can achieve this year’s sales goal. Through September, the company sold a total of 3,537,573 cars, a 2.4 percent drop from a year ago. Third quarter sales in unit terms fell by 0.6 percent year on year to 1,121,796, and that was the lowest number for any quarter of this year. The company said in January that it aimed to sell 8.2 million units combined with its sister company Kia Motors this year, but it has only sold about 5.72 million units in the past nine months.

Hyundai Motor said it still expects the figures can be significantly improved in the fourth quarter, since the release of new cars will be reflected.

“The operation costs for marketing and sales increased as many new cars [including the Avante sedan and Tucson SUV] were rolled out in both Korea and global markets,” Lee, the financial chief, said. “Since the sales of such new cars are increasing, we expect to report better results in the next quarter than we did today. The incentives we are giving dealers overseas will gradually decrease, since the money was given for aging models like the Elantra sedan and they are being replaced.”

The company said the Volkswagen emissions test-rigging scandal hasn’t impacted its sales much. Its biggest rivals in global markets are still Japanese automakers like Toyota, Nissan and Honda.

“It is true that the reputation of ‘clean diesel’ was hurt by Volkswagen, but I think we need more time to see if the scandal really hurts,” Lee said.