Review: ‘Fatal Intuition’ is both haunting and thrilling

Review: ‘Fatal Intuition’ is both haunting and thrilling 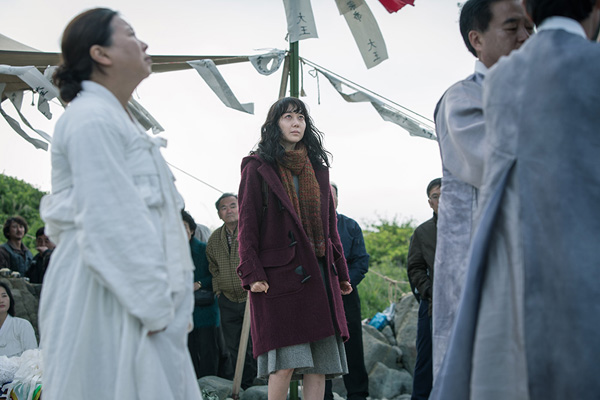 A reproduction of the Buddhist Cheondo ritual is well-replicated in the upcoming crime thriller “Fatal Intuition,” in which the ritual plays a decisive role in setting the eerie tone of the film. Newbie actress Lee Yoo-young plays a mysterious girl, Si-eun, who foresees the future. [CGV ARTHOUSE]

This crime thriller may look like its predecessors but it has something different to offer.

Rookie director Yun Jun-hyoung’s upcoming film “Fatal Intuition” is a typical crime thriller at a glance, following the nail-biting pursuit of a mysterious serial killer by a revengeful pursuer whose loved one fell victim to the deadly trap.

But the film gains a new engine when a mysterious girl who has the power to foresee the future, and hence predict when the next murder is going to take place, appears.

It ratchets up the thrill and intensity of the plot while adding an element of horror.

The film is roughly based on a true story that happened in 1991 when a female college student was found dead in a neighborhood of Busan.

Her death was honored in a Buddhist ceremony called Cheondo. But when performing the final ritual that involves throwing rice into the sea using a bowl attached to a long piece of red fabric, the fabric stretched tight and suddenly snapped.

Then the empty bowl floated back to the shore to stop in front of one young man. The father of the dead girl instinctively felt that he was the culprit, but there was no tangible evidence to prove he was.

The film does a brilliant job of reproducing the ritual, maximizing the eerie, supernatural vibe of the film. The mood remains consistent until the end when a final confrontation happens in a red-lit haunted house on a top of a rocky hill.

Actor Joo Won, who has often appeared in rom-com productions, takes on the role of Jang-woo, who finds his one-and-only little sister’s body, bruised all over, dumped in a large bucket of water at his washhouse.

He says that he lost 8 kilograms to play the tough but ragged character.

While incompetent police officers chase the wrong suspect, a mysterious girl named Si-eun approaches Jang-woo and tells him she saw premonition of his sister being murdered.

Newbie actress Lee Yoo-young plays the character very hauntingly, with the help of her extremely pale face and gray-colored eyes.

Si-eun cannot see the face of the killer, but if she gets in contact with the next victim, she sees fragmented images related to the murder.

Nobody in the village believes her, except Jang-woo.

Tracking a number of other murder cases suspected to have been done by the same person, Jang-woo and Si-eun narrow their focus to the pharmacist Yak-gook. But his good reputation hinders the duo in convincing the police to investigate him further.

So they set off on their own.

The pharmacist is portrayed by veteran actor Yoo Hae-jin, who further strengthens the film.

Director Yun described Yoo’s face as having “two drastic sides,” and indeed his Janus-like performance in the film is as spine-chilling as Lee’s.

Overall, the horror element drives the movie more than the mystery of chasing a serial killer. The identity of the real perpetrator is revealed a little too easily.

“Fatal Intuition” succeeds in providing a good dose of thrill and suspense.

The movie opens nationwide on Oct. 28.