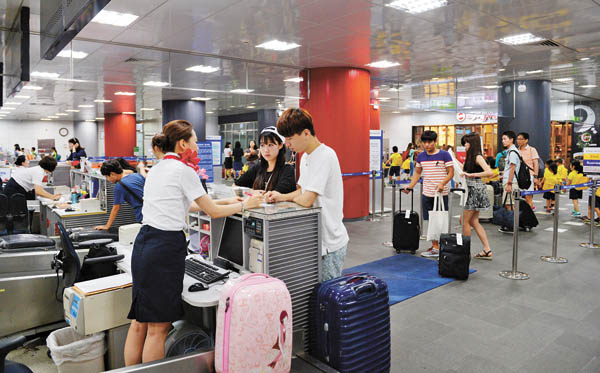 AREX, which directly connects Seoul Station to Incheon International Airport, is the most frequently used public transit for those traveling between the city center and airport.

The line can be classified into two types: the “all-stop train” that stops by 11 stations and the “express train,” which runs directly from Seoul Station to Incheon International Airport.

On the all-stop train, which looks like a normal subway train, the trip from Seoul Station to Incheon International Airport takes 56 minutes and costs 4,150 won ($3.65).

The express train, in contrast, only has reserved seats. Travel time is 43 minutes, and the trip costs 8,000 won. For passengers in a group of four or more, express train tickets are discounted to 6,000 won per person.

If a passenger has a plane ticket from Korean Air, Asiana Airlines or Jeju Air (issued within 14 days), he or she can buy an individual express ticket for 6,900 won.

At the customer service counter in the City Air Terminal, there is an automatic tax refund machine and a currency exchange counter for foreign visitors.