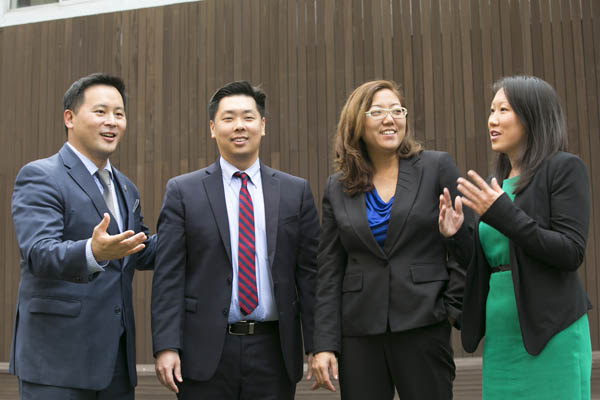 From left: New York State Assemblyman Ron Kim; Peter Kim, the mayor of La Palma; Holly Kim, a trustee of the Mundelein Village Board in Illinois; and Kelly Boyer, (the director of operations for California Senator Barbara Boxer a congressional staff

Ron Kim, the Korean-born New York assemblyman from Queens, entered politics to become a voice for the underrepresented - small-business owners like his parents and the Asian community in the United States.

But the 36-year-old, the first Korean-American ever to be elected as a New York state legislator, has also weighed in on the importance of being a voice for the Korean people in general - which has included representing the Korean view in the historical disputes with Japan.

“I fully understand now the impact of our actions and the intangible impact that it has on Koreans everywhere,” he said Thursday on the sidelines of a forum of overseas compatriots in Seoul.

They were participating in the three-day 4th Overseas Korean Political Forum organized by the Overseas Koreans Foundation at the Koreana Hotel in central Seoul that kicked off Wednesday. Kim flew into Seoul following a week-long trip to Japan, where he met with a dozen officials on the ministerial and cabinet level.

However, he only accepted the invitation by the Japanese Foreign Ministry on the condition that he be able to meet officials to address key human rights issues, namely Japan’s enslavement of Korean women into military brothels during World War II.

“After six months of negotiating, they granted me those meetings,” he said.

But Japanese officials, he continued, claimed to have apologized to Korea dozens of times, citing the creation of its Asian Women’s Fund for those victims.

“My response to them,” he said, “is that regardless of your intent, if the outcome is that you’re hurting others’ feelings and sentiments, that is what matters the most; that you still need to acknowledge the sentiment. There is a disconnect between the intent and the outcome, and we need to somehow bridge that gap.”

Kim became a local hero and a viral sensation last month for taking down a purse-snatcher, coming to the aid of a mother with an infant on a busy Flushing sidewalk. He was surprised at the response he got in Seoul as well, but added that it was one incident compared to everything behind the scenes.

The New York assemblyman has represented the 40th District since 2013, a diverse area where more than 140 languages are spoken.

He emphasized that his Korean heritage prepared him to enter politics in the United States.

Even so, he deals with institutionalized racism, glass ceilings, intolerance, general misinformation and the perpetual foreigner syndrome on a regular basis.

“I think our parents’ generation sacrificed and did a lot more than we give them credit for. I couldn’t even imagine just dropping everything and having the courage to move, without speaking a word of the language, to a foreign place,” he said. “That kind of determination, resilience and grit are the core character traits that I walked away with that prepared me for public service and politics.”

Peter Kim, 32, on the other hand, was elected just this year as mayor of La Palma, a city in southern California.

“After the Los Angeles riots in 1992, the Korean community’s mind changed, thinking that we needed political empowerment. That was the catalyst. Since then, Koreans have been much more involved in the political scene.”

Businesses owned by Korean immigrants, especially around Koreatown, were frequent targets of arson and looting in the wake of the 1992 Los Angeles riots.

“I think the Korean people should view us as an asset,” the mayor continued. “Whatever level of government, we are here, and we can speak on behalf of different Korean interests [in the United States]. … A few years ago the locally elected Korean officials were promoting and advocating the Korea-U.S. Free Trade Agreement.”

Residing in the same state, 31-year-old Kelly Boyer serves as a congressional staffer. As a Korean adoptee who grew up in Minnesota, politics was a means of getting in touch with her ethnic roots. She recalls moving to Washington “without knowing a single soul.”

“I connected to the Korean people there and used my position to help others navigate from my experiences, having been outside of their community,” she said.

Some politicians, including New York Rep. Charles Rangel, are strong advocates for Korean issues, she said, but: “We have an entire group of politician from other parts of the country who don’t have a clue.”

She pointed out the importance of people like her, who work behind the scenes to engage and network to raise awareness about the issues affecting the Korean community.

Holly Kim, 35, a trustee of the Mundelein Village Board in Illinois, shared the wisdom imparted by her colleagues: “When any of us advance, we advance all of us forward, including the ones in Korea.”

She took out her phone to display a black-and-white photograph.

“My great-grandmother was a female independence fight alongside Kim Koo (1876-1949),” she said, referring to one of the leaders of the Korean independence movement against Japan during the early 20th century. “Political activism and trailblazing is in my blood.”