Cop sacrifices his life for sake of autistic boy

Cop sacrifices his life for sake of autistic boy 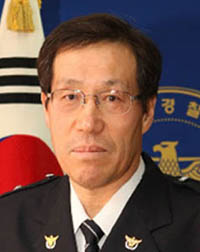 On the 70th anniversary of Police Day in Korea on Wednesday, a 57-year-old officer nearing retirement sacrificed his life trying in vain to save a 16-year-old autistic boy from being run over by a freight train.

Lee Ki-tae, a lieutenant from the Nae-dong Police Station in Gyeongju, North Gyeongsang, attempted to rescue the boy surnamed Kim, who was intentionally lying on a railroad track in Ulsan Wednesday afternoon. As a freight train heading to Gyeongju from Busan approached, Lee and his colleague, Kim Tae-hoon, tried to pull the boy off the tracks without success. Lee and the boy died, while Officer Kim suffered a fractured right leg and an amputated big toe.

Police Day commemorates the establishment of the National Police Agency on Oct. 21, 1945.

The case began around 10 a.m. Wednesday when police received a call from a local motel complaining that “someone [was] causing a disturbance in one of our guest rooms.”

The noisy guest turned out to be Kim, whose autism is considered a second-rank intellectual disability on a three-rank scale, the first being the most severe.

After reaching Kim’s parents in Seoul on the phone, Lee decided to send Kim home to Cheongnyangni Station in eastern Seoul by train. While waiting for the train at Bulguksa Station in Gyeongju, Kim reportedly got upset.

Officers Lee and Kim decided to calm the 16-year-old down on a ride to nearby Hogye Station in Ulsan, which is on the same line heading to Seoul.

Approaching the station, Kim asked to be let out to urinate. He ran onto the railroad tracks, saying, “I don’t want to go home. I’d rather die.” Officers Lee and Kim tried to drag him off the tracks, but he lay down and hugged the rails until the train hit all three. Lee and the boy were killed on the spot.

Police assume the train’s engineer didn’t see the people on the track because the railroad section was curved.

The date and reason the 16-year-old left home for Gyeongju has not been determined.

Lt. Lee began his career as a police officer in 1982 at a police station in Yeongdeok County, North Gyeongsang. He was three years short of retirement. Lee showed a special talent in investigations throughout his 33-year career and was awarded 15 certificates of merit, including one from the Minister of Home Affairs.

According to a long-time colleague, Kim Chil-sung, Lee was a “very generous man.”

“Lee once received a call from a woman saying that her husband was hitting her, which turned out to be a false charge made by a woman with a mental disorder.

“Unlike most officers, who would scold the caller, Lee consulted with the woman and her husband and took her to a hospital to receive therapy.”

Another colleague of Lee said he got along well with junior colleagues. “Lee mingled well with the juniors and was popular among them.”

Lee is survived by his wife, who is also a public official, and two grown sons. His funeral is scheduled for today at the Gyeongju Police Precinct.