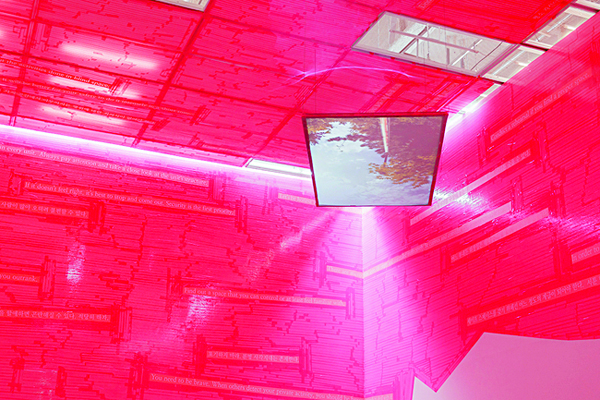 To Nov. 1: The exhibition features the four artists nominated for the fourth annual Korea Artist Prize granted by the National Museum of Modern and Contemporary Art (MMCA) and the SBS Foundation.

The museum announced on Oct. 6 that Inhwan Oh won this year’s prize. In this exhibition, the 50-year artist presents a series of installation and video works related to blind spots both literally and symbolically.

The other three artists are Kira Kim, Na Hyun and Tae Bum Ha. Kim, 41, presents a series of videos to tell the story of individuals’ “socio-cultural” positions in Korea, which is a unique country still dominated by Cold War ideologies, and, at the same time, a center of global capitalism.

Na, 45, presents installation works, objects, photos and documents that show his archaeological and anthropological comparative study of the Devil’s Mountain (Teufelsberg) in Berlin and Nanji Island in Seoul. Both are huge artificial hills formed on top of urban waste.

And Ha, 41, presents a series of photos of utterly white landscapes. In fact, he recreated the images of disasters sites as all-white miniatures and took photographs of them.

To Nov. 8: This solo exhibition showcases the works of painter Sunghun Kong.

For this exhibition, Kong has taken a very delicate subject, twilight, and ambitiously defies its transitory nature and paradoxically immortalizes the short interlude between day and night and vice versa, according to the gallery.

Viewers can enter the realm of this “magic hour” through the different angles of approach manifested in his vast compositional and color exploration and experimentation, the gallery says.

Admission is free. The gallery is closed on Mondays. Go to Anguk Station, line No. 3, exit No. 1 and walk for 10 minutes.

To Nov. 29: Five bluestone sculptures by New York-based Swiss artist Ugo Rondinone are now on display in Kukje Gallery’s K3 space. The sculptures may remind Korean viewers of goindol, which are Korean dolmen from the Bronze Age, or primitive idols from other cultures. The artist is known for his interest in time and displacement.

The museum is located inside the Hansol Oak Valley resort in Wonju, Gangwon, and closed on Mondays.

For an indefinite period: “Really?” is the inaugural exhibition of the Arario Museum, which opened on Sept. 1, 2014, in the iconic ivy-covered brick building “Space” designed by the legendary Korean architect Kim Swoo-geun (1931-86). Space’s intricately linked display areas and spiral staircases remain in their original state, while the artwork is wittily installed in unexpected locations.

About 100 pieces by more than 40 artists including Korean-American video art pioneer Nam June Paik, and British artists Marc Quinn and Tracey Emin, are on display. They are part of the vast collection of Ci Kim, one of Korea’s most important collectors.

The museum recently added a new exhibit: “Eight Rooms” by Chinese artist Li Qing. The work is a recreation of the artist’s studio and rooms, on whose walls his own paintings are hanging.

Admission is 10,000 won for adults. Children under 10 are not allowed to enter.

Go to Anguk subway station, line No. 3, exit 3 and walk for three minutes.