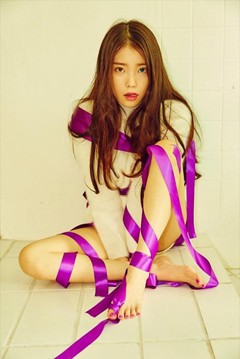 Singer-songwriter IU has swept all the online music charts with her new song, “Twenty-Three.” The track was unveiled to the public at midnight on Friday and instantly flew to No. 1.
Other tracks from her newest mini album also ranked in the top 10 most-streamed songs on major music portals.
Inspired by the Cheshire Cat from “Alice’s Adventures in Wonderland” by Lewis Carroll, “Twenty-Three” is based on funky beats and disco sounds. The 23-year-old singer wrote, composed and produced all the tracks for her mini album.
After the new album’s release, local entertainment news agencies ran stories about IU’s success with “Twenty-Three,” saying that IU’s recent romantic relationship with indie musician Chang Ki-ha didn’t stop her from achieving another success.
Musicians, especially young singers who have a huge fan base, don’t usually publicize their romantic relationships because they think it affects album and concert ticket sales.
Because of this, some industry insiders expected the news of IU dating Chang to negatively affect her album sales, but the versatile singer once again lived up to her reputation.
In releasing a new album, IU reportedly said she would focus more on concerts rather than promoting her new album through TV music shows.
By Sung So-young