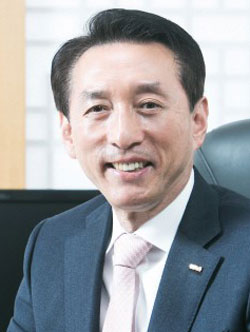 A week after Kim Seok-ki was sworn in on Oct. 15, 2013, as the president and CEO of the Korea Airports Corporation, he couldn’t even step foot into its headquarters due to such strong opposition from the labor union.

The group claimed he wasn’t qualified because he had spent the majority of his career working as a police officer.

So Kim installed a temporary office in the corner of one of the buildings at Gimpo International Airport and slept for nine days on a field bed.

But over the past two years, the situation has reversed, and Kim is practically a fixture at labor union events, including the New Year’s hike.

He, in part, credited prioritizing communication as landing him where he now stands.

Q. How did you win the trust of the labor union?

A. Executives advised that I sneak into the labor union office at night, when there would only be a few people who could deter me. But I refused. I said I wanted to pay a visit honorably, and my words were somehow heard by the union members. I think they got this feeling that I wasn’t the type of person who would pull gimmicks, so in the end, they accepted my offer to talk. I keep in mind the phrase that all problems lie at the source.

Your company reached a deal on the peak wage system relatively early with the union, which belongs to the hard-line Korean Confederation of Trade Unions.

It’s impossible for management to launch a conversation with the workers if the topic is about a system that won’t help them. They agreed to the deal the system guarantees - hiring an additional 109 staff members over two years, which would aid existing workers’ workload.

Do you take pride in being a professional manager?

The company saw its net profit surge 35 percent year on year in 2014 to 173.5 billion won ($154.1 million). That’s the largest increase in company history. The airports in Daegu and Cheongju, which both suffered chronic losses, turned around this year. Both airports are run by female presidents.

Were they not before?

No. I named the first female president for the Daegu airport. Then I was criticized for doing something unprecedented as a person with no knowledge of airport operations.

So I told her she should do [her job] right unless she wanted my reputation to get worse.

You recently launched a marketing scheme that emphasizes patriotism.

I had 18 large Korean national flags installed across Gimpo, Gimhae and Jeju airports last year and placed drawings of the Taegeuk pattern near the control tower. I intend to have the entire airport do the same. If you bump into the Korean flag overseas, you feel uplifted. I want Koreans to have the same feeling at local airports, too.