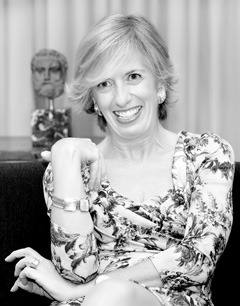 Stefania Giannini, the Italian minister of education, university and research, talks with the Korea JoongAng Daily on Wednesday at the Italian ambassador’s residence in central Seoul. [Park sang-moon]

On her first visit to Korea earlier this week, it only took one train for Stefania Giannini to see how far the country had come in terms of technological advancement.

Traveling from Seoul to Daejeon at some 300 kilometers per hour (186 miles per hour) via the national high-speed rail system, KTX, the Italian minister of education, university and research asserted that Korea was “dynamic.”

But also unique to Korea is its hyper-intense education system, with some parents shouldering massive debt just to finance their children’s education.

Giannini, who formerly worked as a glottology and linguistics professor, was firm in stating that Korean universities needed more “autonomy,” which she added was essential to promoting diversity in academics.

The Korea JoongAng Daily sat down with Giannini at the Italian ambassador’s residence in Yongsan District, southern Seoul, Wednesday night to hear more about her thoughts on domestic education and cooperation between Korea and Italy.

The following is an edited excerpt.

A. During my meeting with Minister Choi, we discussed the high potential of bilateral cooperation in [several] fields, including space. Italy is a well-known leader in this field, and Korea is quite interested in developing research in basic and applied sciences for the production of satellites. We also discussed the importance of interchanging researchers and [strengthening cooperation] between universities.

My meeting with Minister Hwang was focused more on the spread of knowledge of the Italian language and culture. Italy is interested in offering more [learning opportunities] from the high school level. We also discussed various educational reforms in both countries. He explained to me the free semester system, which I found highly intriguing.

Korea’s Education Ministry recently announced that it would reintroduce state-authored history textbooks. What are your thoughts on that?

In Italy, we do not have a top-down process of producing history textbooks; there’s a free market. Of course, the state has the responsibility to design the framework and give guidelines for different subjects, but there’s no top-down inspection [on textbooks].

In your opinion, what are the strong and weak points of Korea’s education system?

Maybe I don’t know enough yet [about Korean education], but to summarize my first visit here and the data and reading materials I referenced about the Korean education system, I think one strength would be the common opinion of the government and the public that education is to be highly valued.

The weakest point may be how universities lack autonomy. Many countries I visited, including those in the West, [implement] a top-down process, rather than a bottom-up. I think the best results come from the [latter], for instance, when students and researchers have more mobility.

What do you mean by “autonomy”?

Within a [common] national framework, universities can decide how to plan their budget.

How are the education sectors in Korea and Italy currently cooperating?

Two sectors, engineering and technology, are on the rise. Korea is strong in this regard, and Italy is an advanced country in basic science, physics, engineering, nanotechnology, biomedicine and so on. There’s a stereotype that Italy is simply the capital of cultural heritage, but there’s so much more than that.