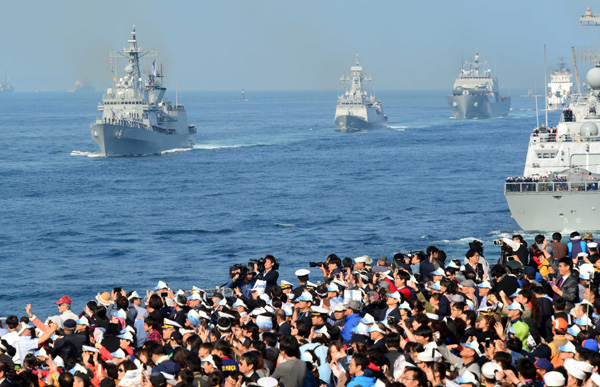 SEONGNAM, Gyeonggi - Despite the recent controversy about Washington’s refusal to transfer technologies essential to building advanced fighter jets, Korea has already managed to develop some of the required systems, the JoongAng Ilbo learned Thursday.

Washington informed Seoul in April that it would not issue licenses for the transfer of four technologies considered crucial for Korea’s project to develop new multirole fighters with more advanced capabilities. Under the KF-X program, the government planned to invest a total of 18.4 trillion won ($16.2 billion) to develop 120 jets by 2025.

The U.S. rejection of the technology transfer was considered a major setback. Seoul’s calls for technology export licenses from Washington were repeatedly rebuffed, and the latest refusal came as President Park Geun-hye was visiting the United States earlier this month.

The JoongAng Ilbo learned Thursday that the Agency for Defense Development (ADD) has managed to develop two out of the four core technologies on its own.

The ADD even showed trial versions of an infrared search and track (IRST) system and electro-optical target tracking devices (EO TGP) at the Seoul International Aerospace and Defense Exhibition. The products, built in cooperation with Korean companies, were not available for public viewing but presented in a separate exhibition room to a small group of selected guests.

The exposition is taking place from Tuesday to Sunday at Seoul Air Base in southern Gyeonggi.

In addition to those two technologies, the United States refused to transfer technologies for the active electronically scanned array (AESA) radar and radio frequency (RF) jammer.

The ADD said Korea has also completed development of the RF jammer, but the test product was not shown at the exposition.

While the ADD managed to obtain three out of the four core technologies, it needs more work to develop the AESA radar, officials said. The researchers have succeeded in developing a half-size module, and it will take time to build a real-size system that works on a fighter jet, they said.

“We did build the trial products for some technologies,” an ADD official said. “But when a new automobile is developed after investing tens of billions of won, you still find a malfunction during a test drive. Just like that, we are not sure what will happen when these new systems are placed on a fighter jet. Because they still must be applied to a real fighter jet, I would say this is incomplete development.”

Of the test products displayed, the IRST system was built for a maritime vessel, and top military officials said it just needs a little work to be installed on an aircraft.

“We secured the necessary technology while developing the IRST system for a ship,” said Jung Hong-yong, president of the Agency for Defense Development. “Modifying the system to place it on a fighter jet is just a matter of time.”

Air Force Chief of Staff Gen. Jeong Kyung-Doo, after reviewing the product, said the technologies can be used for the KF-X project with mere modifications.

The ADD said it started developing the four core technologies since the mid-2000s.

“It is the basis of war to hide your location while critically wounding the enemy,” an ADD official said. “Because the weapons systems are improving rapidly, we selected those technologies as our next mission after completing the T-50 trainer jet development.”

The T-50s are Korean supersonic advanced trainers developed by the Korea Aerospace Industries in cooperation with American defense company Lockheed Martin. It is Korea’s first indigenous supersonic aircraft, and it entered active service in 2005.

Despite the progress in development of the core fighter jet technologies, Korea still is not out of the woods on the KF-X program, another ADD official said. Because fighter jets are operated under extreme conditions, there is the possibility of malfunctions when newly developed systems are placed on aircraft, he said.