Textbooks will have ample inputs: historian

Textbooks will have ample inputs: historian 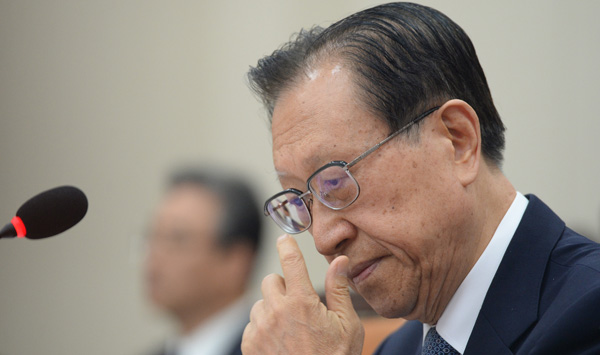 Kim Jung-bae, head of the National Institute of Korean History, at a briefing to the National Assembly’s Special Committee on Northeast Asia History on Friday. [NEWSIS]

Along with historians, experts in the law, humanities and social sciences will participate in compiling the contemporary history sections of new textbooks to be written by the government, a veteran historian tasked with the project said Friday.

Kim Jung-bae, head of the National Institute of Korean History, briefed the National Assembly’s Special Committee on Northeast Asia History about the government’s plan to reintroduce state-penned history textbooks to middle and high schools starting in 2017.

Complaining that the current textbooks, developed by private publishers and selected by each school, contain left-leaning biases, the Ministry of Education announced earlier this month that state control over authorship of history textbooks will be restored. The National Institute of Korean History, which is under the Education Ministry, was asked to develop the new materials.

About 30 to 40 authors will be selected to develop new textbooks, Kim told lawmakers on Friday. “The drafts will be completed in mid-November,” he said.

Asked how many authors were recruited by the institute already, Kim refused to answer.

After the Park Geun-hye administration announced the plan, historians declared en masse that they wanted nothing to do with it.

Despite an earlier remark that the authors would be made public in advance, Kim responded ambiguously to lawmakers’ questions about whether their names will be announced.

“I will listen to their opinions and seriously consider what I will do,” Kim said. “While historians will author the premodern history, historians and political scientists, economists, sociologists and constitutional scholars will participate in authoring the modern sections, particularly contemporary history.”

As of now, eight publishers provide history textbooks. While seven of them are criticized for having left-leaning biases, Kyohak Publishing Company faced criticism for a conservative bias.

Asked if authors of Kyohak textbooks will be invited to develop the new textbooks, Kim said, “It is my personal opinion that those who are too controversial must not participate.”

While the main opposition New Politics Alliance for Democracy (NPAD) demanded that Kim step down for his ideological bias leaning to the right, Kim said he has no intention of doing so.

“You previously served as the president of Korea University. It is not suitable for you to head the institute,” said Rep. Kang Chang-il of the NPAD. “I respected you as a scholar, but you have now become a politician.”

Kim, 75, is an expert in Korea’s ancient history. He became a professor at Korea University in 1977 and served as the school’s president from 1998 to 2002. He was named the head of the National Institute of Korean History last March.

Kim told lawmakers on Friday that he has no ideological biases.

“When the ideological controversy started over the textbooks a few years ago, I was told that a neutral person must be put in charge and resolve the situation,” Kim said. “That’s why I took the post. I am not an expert in contemporary history. I am not a progressive or a conservative.”

The controversy over ideological biases in history textbooks started in 2013 when the Ministry of Education ordered all eight publishers of middle and high school history textbooks to make corrections to materials that had passed initial screening by the state-run National Institute of Korean History.

In October 2013, the ministry recommended the eight textbook publishers make a total of 829 revisions. While Kyohak Publishing Company - criticized for its conservative, right-wing bias - agreed to make all the changes, the authors of the other seven, criticized for left-leaning bias, refused. The controversy ended one month later after the seven publishers revised the texts on their own.

Following the incident, the ministry said it would overhaul the textbook authentication system to prevent further ideological disputes. Now the Park administration and the ruling conservative Saenuri Party are pushing a plan for the government to take control of history textbooks.

Kim admitted that the institute was at fault for having failed to properly screen the textbooks under the current system. He, however, challenged the opposition party for labeling him a politician.

“The late President Kim Dae-jung once asked me to head his political party, but I declined because I had my duty as the university’s president,” he said.

“Since then, I only worked with history. I have never served in any political position. The National Institute of Korean History is a research institute. It is not a political agency.”

The textbook issue was debated intensely between President Park and NPAD Chairman Moon Jae-in on Thursday, when they met at the Blue House along with the chairman of the ruling party and the two parties’ floor leaders.

Despite Moon’s demand to reconsider her plan, Park made clear that she will stick with it.

Moon continued to criticize Park on Friday. He said the public, including historians and teachers, and some ruling party lawmakers are critical of the plan. The opposition leader, however, said he will not hold hostage legislative activity, such as the budget review, to stop Park.