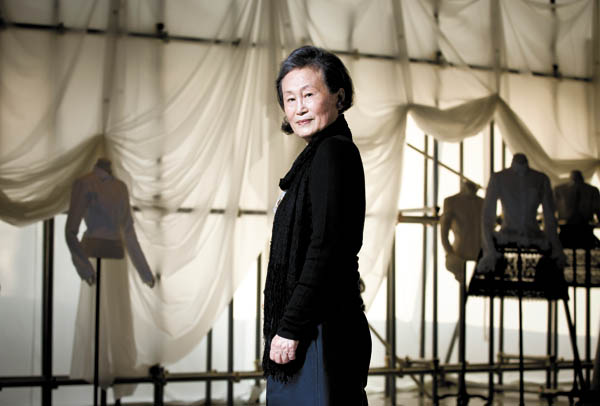 Jin Teok has been one of the leading figures in bringing Korean fashion to a global audience. “Anthology: Jinteok. Creation of 50 Years” at Dongdaemun Design Plaza celebrates her passion and accomplishments. [JUN HO-SUNG]

Some of her career highlights include designing the 1988 Seoul Olympics uniform; assembling the first generation of Korean designers in 1989 to form the Seoul Fashion Association, in which she served as the first president for five years; and participating in Pret-a-Porter Paris, a semiannual international fashion show, beginning in 1993, bringing Korean fashion to the global stage.

And in 1999, Phaidon, a British arts publication, listed Jin as one of the 500 fashion designers that transcend the 20th century.

Recently, the 2015 Seoul Fashion Week, which took place at Dongdaemun Design Plaza (DDP) from Oct. 16 to 21, kicked off with a celebration of Jin’s 50th career anniversary. In addition, the exhibit “Anthology: Jinteok, Creation of 50 Years” is ongoing at DDP through Nov. 6.

The designer is known professionally as Jinteok. 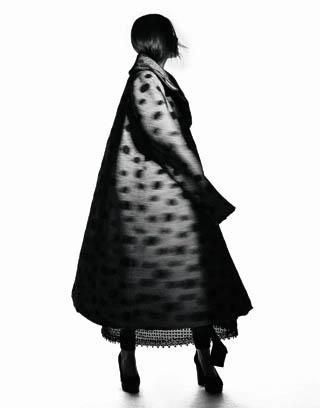 Under the theme of “quiet,” an A-line coat made of lace, suggesting the night sky with a dotted pattern that shines like stars against the light background, exudes calmness while enhancing feminine beauty. [JINTEOK]

“It’s been a tough road, but I am a very happy designer,” she said.

Just as Coco Chanel made the tweed jacket her signature work and Diane von Furstenberg the wrap dress, for Jin it is the white shirt. “It was the groundwork for my design.”

When Jin was a child, her family resided in Wonsan in what is now North Korea, where she witnessed the Korean War. Jin fled to Jeju Island in the South with her family when she was 16.

On the side of the mud-walled hut in which her family lived was a small window covered with changhoji, or traditional Korean paper. After returning home from school one day, Jin was looking out the window when she noticed her brother’s white shirt hanging above.

“There was something alluring about the way my brother’s shirt shined against the sunlight permeating the changhoji,” she recalled. “How that shirt looked transparent and delicate, almost as if it would make a crisp sound if you folded it, is an unforgettable image that has lingered in my mind since.” 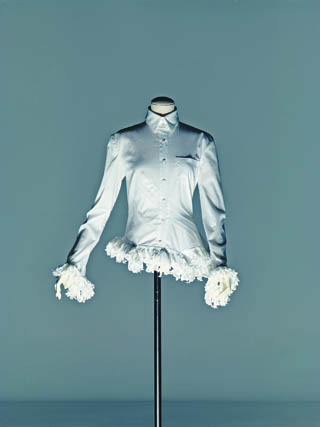 A white shirt suitable for young girls demonstrates the endless possibilities of the combination of “girl” and “white shirt,” two of Jin’s favorite concepts. [JINTEOK]

That was the defining moment that sparked her love for sleek, simplistic lines and translucent white fabric that absorbs all light. With a new desire to “create a white shirt with my own hands,” she began studying fashion. And just like a woman who has never forgotten her first love, the white shirt has always been in her collection.

“In womenswear, the white shirt stands apart from the blouse. It elevates one’s effeminate beauty,” she explained. “One year, I designed a shirt with the neckline dipping low in the back in order to reveal the smallness and bumpiness of one’s neck bones and shoulder lines, as I heard many find those features attractive. Another year, I designed a shirt with the top button starting right below the chest, revealing just a bit of cleavage. Other times, I would lengthen the sleeves, widen the torso, or either add or eliminate decorative elements. To this day, I keep exploring creative variations of white shirt design.”

Another design that has interested Jin as much as the white shirt is the combination of black and white. Although she has created many colorful garments, such as transforming vibrant artworks by 16th-century Korean artist Shin Saimdang into a jacket with traditional Korean embroidery, or dresses in deep red hues, she has consistently produced black-and-white designs over the years. Then and now, her business and casual wear are variations on black and white. 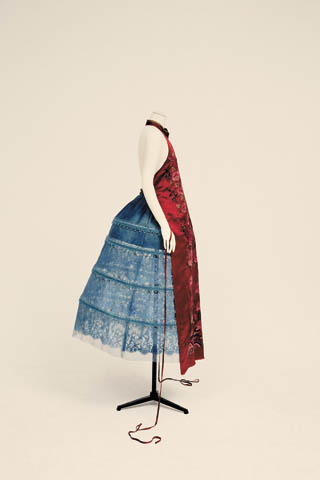 “I think it was about 10 years ago when, as I was on my way out of work, I was looking at a mirror. The reflected image of me with the black jacket and white shirt was particularly beautiful. I thought, ‘Ah, it took me so many years to fully grasp the concept of black-and-white.’ After using and discarding so many colors repeatedly, it seemed that these were the colors I was bound to settle on.”

The theme of “Jinteok: Anthology,” the 200-page fashion book that complements the exhibition, is also black and white. Even the book’s preface, written by global fashion columnist Suzy Menkes, begins by praising “Jinteok’s white”:

“White has never been considered a colour; it is a neutral shade that offers peace for the eyes - and the mind … But Jin Teok has a different approach. In her fashion, white is in the foreground. With the different textures of slithering satin, crunchy mesh, the lightest chiffon, dense lace and the smoothest silk, the designer’s vision is of white as a colour … Jin Teok’s clothes are like a poem. They speak from her soul, sometimes as a whisper, occasionally with a shout, always with grace … In this culture of MORE! - more sound, more colour, more fashion, more relentless noise - Jin Teok has offered us, for half a century, something uniquely precious: the still, small voice of calm.” 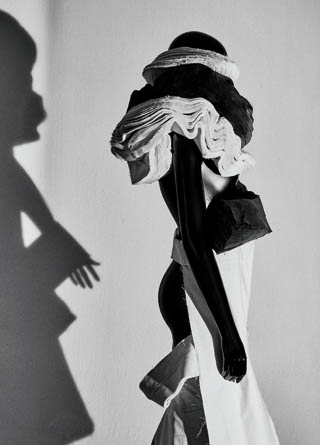 When Jin made her Paris debut in 1993, Menkes, then a reporter for the International Herald Tribune, dedicated a full page to the fashion designer from Asia.

Even in the 50th year of her career, Jin remains very busy.

“Although I’m a designer who thinks six months in advance, I still find myself so caught up with work and losing track of time,” Jin said. “When Seoul Fashion Week’s general manager, Jung Gu-ho, invited me to participate in the 50th anniversary exhibition, I accepted, thinking, ‘Let’s give it a try,’ and immediately regretted it. I realized only too late that it was too close to the Korea Now exhibition I planned to prepare for two years ago. Still, I figured I could select and hand over some of my archived works. Even so, it was still no easy task.”

The “Anthology” exhibition displays about 80 designs selected from Jin’s archives and arranged by 10 chosen themes. These themes - earth, night, blood, star, dawn, air, quiet, girl, dew, breeze - represent Jin’s affinity for nature and the day-to-day as her sources of inspiration. Likewise, the fashion book centers on these themes. Both the exhibition and the book were overseen by creative director Seo Young-hee, who recently curated “Korea Now: Craft, Design, Fashion and Graphic Design Korea,” an ongoing exhibit at Les Arts Decoratifs in Paris to celebrate the 130th anniversary of Korean-French diplomatic relations.

But to merely show clothes would render the exhibition meaningless. Rather, the exhibition had to transcend and present itself as a work of installation art in order to set an example and inspire future designers. Fortunately, Jin had Seo’s help, and the two had already worked together before.

“It was challenging to classify all of these various designs into 10 themes, but it turned out to be a new and enriching experience,” Jin said. “If visitors deem it to be worth only 50 points out of 100, then I’ll modestly accept it. That way, I’ll have a new goal to achieve 60 or 70 points next time.”

It took 2,000 rolls of cotton fabric to fill the exhibition space, and many hours to cut it into tabloid-sized sheets and bind them like a book. But the veteran designer, who continues to work diligently, is grateful for the experiences she has had and claimed she enjoyed the new experience of “creating poetry with fashion,” as the exhibition title suggests.