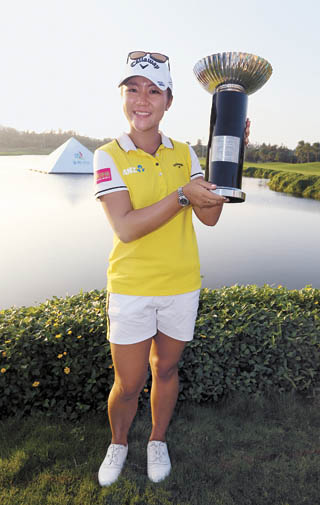 Making history - Lydia Ko celebrates after winning the LPGA Taiwan Championship on Sunday. The Korea-born Kiwi finished the event at 20-under 268 at Miramar Golf Club in Taiwan, beating Ji Eun-hee and Ryu So-yeon by nine strokes. At 18 years, 6 months and 1 day, Ko is now the youngest player to collect 10 wins in the LPGA Tour. Ko, who has five wins this season, also took the world No.1 title after Park In-bee skipped her title defense to play in the KLPGA Tour’s final major tournament, the KB Financial Star Championship. Park tied for second with Kim Hae-rym, while Chun In-gee won at 10-under 274. [AP/NEWSIS]