Music has charms to soothe that savage beast under the hood

Music has charms to soothe that savage beast under the hood 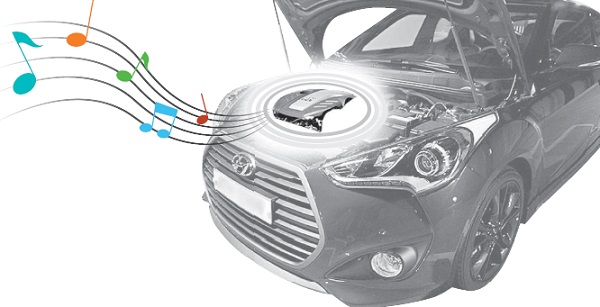 As a matter of fact, it’s the only vehicle in the world that lets you choose the engine sound.

When accelerating the car on the high-speed track at the Korean automaker’s Namyang research center in Hwaseong, Gyeonggi, recently, the vehicle made an uncommonly loud roaring sound for a vehicle with only a 1.591-liter engine capacity.

And when slowing down to get a phone call the roar of the engine subsided.

The vehicle, introduced in January, has undergone a facelift for the first time in six years.

The sound selection feature is a result of what the company describes as the engine sound equalizer. The driver can choose from three engine sounds - dynamic, sporty and extreme - and can make fine tone adjustment between high, mid and low.

The extreme mode makes the vehicle roar like a race-car with a V12 engine. The driver can also create their own engine sound and store up to six on the car. And if you like what somebody else has got, drivers can also share custom-made engine sounds with other drivers.

“After monitoring the responses from our customers for the next two years, we plan on installing the feature on the high-performance N car,” a Hyundai Motor official said.

The N car - named after the company’s Namyang research center - is a major high-performance vehicle project that the Korean automaker is working on, targeting commercial production in 2017. The concept car was revealed at the Frankfurt motor show last month.

Engine noise that was once considered a nuisance by some is now becoming a key design element in the global market.

Engineers at Italian supercar brand Maserati are working with pianists and composers to create engine sounds.

Fabrizio Cazzoli, the Maserati Asia director, showed an exceptional attachment to engine sounds when he said it was a pity that engine sounds are removed from electric and hybrid cars.

In 2012, Maserati attempted to determine the most exciting sounds by monitoring the heartbeat and blood pressure of an audience in an auditorium while exposing them to various engine sounds.

The vehicle has a straight exhaust pipe that allows emissions to flow more freely, and the sound is tuned to a tenor C note with mid-low pitch that many people found soothing.

When developing the vehicle, engineers tested various parts, including the exhaust pipe length as well as the location of the muffler, so the driver could enjoy the sound the car made, whether the driver was shifting gears or applying the brakes.

When Ferrari developed the V8 turbo engine that is installed on its latest 488GTB, engineers worked on harmonics and tonality.

The engineers created a discharge header that has a longer pipe so drivers could enjoy the roaring engine sound even when the vehicle is driven with its roof opened.

“When accelerating, the sound of the V8 engine gets louder to match the speed,” said Ferrari executive Uhm Jin-hwan. “The vehicle underwent in-depth research so that the driver can feel the dynamics of the supercar with a maximum speed of 330 kilometers per hour [200 miles per hour] with all five senses.”

Korea is likely to follow the global trend of tougher controls on vehicle noises. The United Nations Economic Commission for Europe plans to tighten vehicle sound regulations from the current 74 decibels to 72 next year and further lowering it to 68 by 2024.

“Our vehicle noise regulations follow the international standard set by the United Nations,” an official at the Ministry of Environment said. “We get affected when the European regulations tighten.”

Industry experts say there is a limit to the engine noise created externally, and there is growing interest in the development of engine noise only heard from within the vehicle.

Japanese luxury vehicle brand Lexus, which is known for its quiet engine sound, has also been working on designing an engine sound that only the drivers can hear inside the vehicle.

When the wheels hit the pavement, the vehicle has an engine that could make an intimating roar. But it travels with tranquility. The roaring V8 engine sound and the screeching noise of the break are only audible within the car thanks to Lexus’ active sound control.

The Lexus RC F’s chief engineer, Yukihiko Yaguchi, said the vehicle was designed so that the drivers can enjoy the sound of its V8 engine without disturbing neighbors, even when driven in the middle of the night.

Some automakers have created a technology with both systems that allow lowering of engine sounds and increasing it.

Infiniti’s Q50 has active noise control, which cancels out noises intruding into the cabin via audio speakers installed in its doors. The active sound creator system, on the other hand, allows drivers to have a better driving experience by controlling the noise level and dynamism of the engine according to speed and driving mode. The engine sound flows out of high-quality Bose speakers.

Market experts say that while global automakers will continue to develop a tranquil engine sound as it creates a premium image, the competition to create an engine noise that can enhance driving experience will continue.

“For customers with high loyalty, engine sound is the same as the brand logo,” said Prof. Ko Kwang-ho of Ajou Motor College. “As automakers like Bentley are using the scent of its interior on its brand identity, automakers are expanding their designs on the five senses.”

Bae Myeong-jin, Soongsil University professor of sound engineering, said the noise from a vehicle engine is a two-way communication tool between the car and driver.

“Psychologically, accepting the changes in speed and road conditions, sound change plays an important role,” Bae said. “The driver feels pleasure and a sense of conquest through sound when the car makes an immediate response to the driver’s action like stepping on the accelerator.”