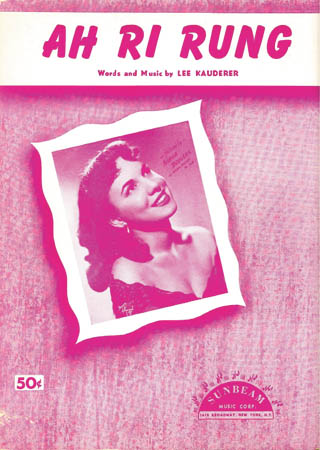 The cover of the EP “Ah Ri Rung” released in 1954 in the United States. It features the Korean folk song “Arirang” composed by Lee Kauderer. The EP will be on display until Nov. 15 in an exhibition at the Korea House in Jung District, central Seoul, along with about 40 rare relics related to “Arirang.”

The exhibition is taking place on the sidelines of “World Music, Arirang,” which runs from Tuesday to Nov. 15 at the Korea House Folk Theater. A total of 10 traditional master performers will sing various versions of the folk song every night at the venue.

The Cultural Heritage Foundation, the organizer of “World Music, Arirang,” said the event would be a rare chance for Koreans to meet renowned traditional performers and at the same time enjoy various renditions of the beloved song. For reservations, call 02-2266-9101 or visit www.kh.or.kr.