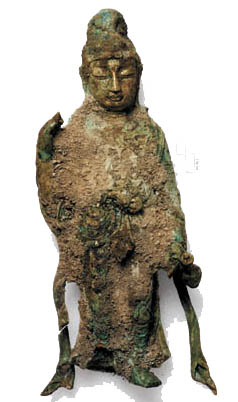 This ninth-century Buddhist statue is from the Unified Silla period (676-935). [HANBIT INSTITUTE OF CULTURAL PROPERTIES]

Korean archaeologists uncovered a ninth-century Buddhist statue from the Unified Silla period (676-935) at a temple site in Yangyang County, Gangwon Province. The artifact is the largest from the era and also one of the most intricately decorated from throughout the Silla Dynasty (57 B.C. to A.D. 935) period.

The gilt-bronze statue of a bodhisattva measures about 40 centimeters (15.75 inches) in height, but when assembled as a complete set, with the mandorla (halo) on the top and the pedestal on the bottom, it is taller than 50 centimeters, researchers at the Hanbit Institute of Cultural Properties said.

Buddhist statues from this era are usually 20 to 30 centimeters in height. It is also very rare to find gilt-bronze Buddhist statues in Korea that include the mandorla and the pedestal.

Researchers are currently further studying the statue, but given its artistic and academic value they expect the piece to be designated as a state treasure.