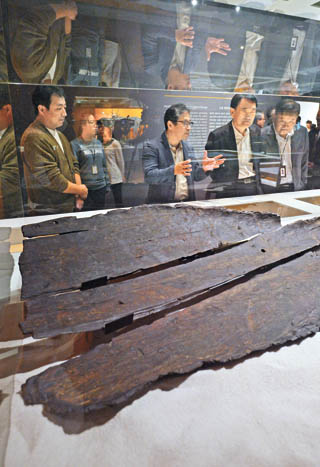 Korea’s first-ever wooden boat, found in Changnyeong County, South Gyeongsang, in 2005. It is believed to have been about 4 meters (13 feet) long and resembles a canoe. [NEWSIS]

Climate change is a hot topic these days. 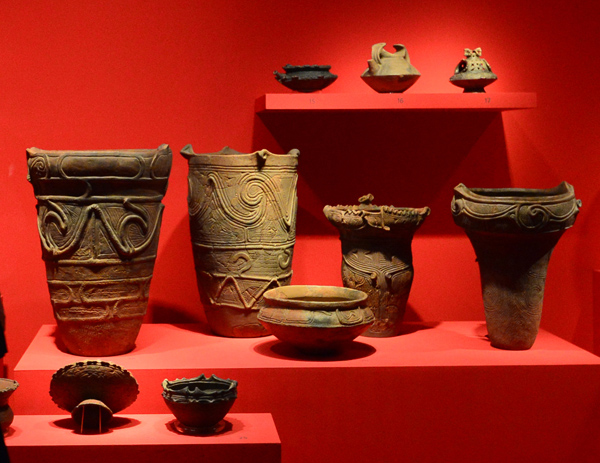 The Earth’s surface is heating up, and it’s bringing about profound changes like rising sea levels.

The question is how to deal with it.

The Neolithic era may seem like a totally irrelevant subject here, but in fact, climate change was something that people in ancient Korea had to deal with, too.

This is evident at the new special exhibition at the National Museum of Korea in Yongsan District, central Seoul, that kicked off its two-month run last week. Titled “Neolithic People: A New Life and a New Climate,” the exhibition examines how the people of the Neolithic period adapted to environmental changes.

“About 18,000 years ago, the Earth was the coldest since the evolution of the human species,” Park Jin-il, the curator of the museum’s archaeology and history department, told reporters last week. “It was about 10,000 years ago that the climate we know today was established.”

Korea’s Neolithic Period, according to the Korean Archaeological Society, refers to the period between 10,000 and 3,500 B.C.

As temperatures rose, the fauna and flora also changed. This meant the animals and plants the Neolithic people hunted and gathered changed. As a result, they had to alter their hunting tools and utensils.

It all sounds obvious now, but the changes were quite a shock, and the new developments were a revolution, museum organizers say.

“Neolithic people overcame the challenges presented by such changes in the local ecosystem by actively developing survival strategies that utilized a wide range of natural resources,” the museum’s director, Kim Young-na, said.

What makes this exhibition especially interesting are some rare artifacts that are being shown for the first time.

For example, Korea’s first-ever wooden boat was found in Changnyeong County, South Gyeongsang, in 2005. It is being displayed for the first time after a 10-year restoration effort. Made with 200-year-old pine, it measures 310 centimeters (122 inches) by 62 centimeters.

When it was whole, it is believed to have been about 4 meters (13 feet) long. It bears a striking resemblance to modern canoes, Park says, as it was made by hallowing out a tree trunk.

Korea’s first-ever earthenware, found on Jeju Island last year, is also being displayed as a whole piece for the first time. Many of Korea’s Neolithic artifacts were found on Jeju, Korean archaeologists say. The earthenware is believed to be about 9,600 years old.

Besides presenting how Neolithic Koreans hunted, fished, gathered and cooked, the exhibition also examines their burial customs and artworks - things that warmer weather and abundant food supplies allowed them to focus on.

Tombs of various shapes emerged during the era. And burial items ranged from stone axes and fishing gear to ornaments and accessories.

One of the most interesting artifacts from this sections is the collection of shell bracelets.

In 2010 on Gadeok Island in the southern port city of Busan, archaeologists found a cluster of Neolithic tombs that contained the remains of 48 humans and 100 pieces of pottery, volcanic glass, animal bone and other artifacts.

The cluster turned out to be the largest tomb complex from the third stage of Korea’s Neolithic era, between 6,500 and 5,500 B.C.

It was there that archaeologists found 20 shell bracelets. Shell bracelets had been found in Korean Neolithic tombs in the past but very rarely being worn by the dead. In this case, the shell bracelets were placed on the body, connected so as to form a shell necklace.

The section dedicated to Neolithic art is relatively small and perhaps the only disappointing part of the exhibition. Many of the clay, stone and animal-bone figurines are small, measuring less than 10 centimeters in height. “It is believed that Neolithic people carried the figurines with them,” Park said.

Just like most of artifacts on display, the Neolithic art also shows how ancient people weren’t all that different from people today. The artworks take the shape of a voluptuous woman, a benign-looking human face, a seal or a sea lion, and often represented people’s wishes for prosperity and shelter.