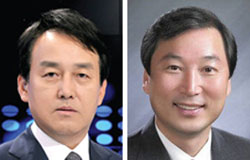 President Park Geun-hye has appointed a former journalist to be her newest spokesman, in keeping with her tradition of selecting a veteran from the media industry.

The Blue House on Sunday announced that Jeong Yeon-guk, a former anchor at MBC, would fill the position that has been left vacant for 20 days now by Min Kyung-wook, also a former journalist, who resigned earlier this month to prepare his run in the upcoming general election.

Jeong, who began his journalism career in 1987 at MBC’s Ulsan branch, recently tendered his resignation, ending a nearly 30-year career.

“Though I have a lot to learn [as the spokesman], I will do my best and strive to learn my job quickly,” he said before reporters after the announcement.

The presidential office also announced that Park had named another former journalist, Yook Dong-in, as the new director of the Blue House’s press center.

Yook, who served as the spokesman for the Financial Services Commission, filled the post on Sunday, a position that was left vacant by Jeon Kwang-sam, who also stepped down to run in next year’s election.

The appointments come as the Park administration completes the first half of its five-year term. The next presidential election is in 2017.

The news that Park had appointed two former journalists sparked criticism among some observers that the decision to put media veterans in government posts was in violation of journalistic ethical codes, which require reporters to be objective.

The main opposition party was quick to lash out at the appointments.

“It is just inappropriate to place a journalist, who has a responsibility to keep the power in check, at the center of that power,” lamented Kim Yeong-rok, a member of the New Politics Alliance for Democracy (NPAD).

Kim added that placing journalists in government positions had the potential to lead to under-the-table dealings between public offices and the media.