Short-lived closure in reunions’ final round

Short-lived closure in reunions’ final round 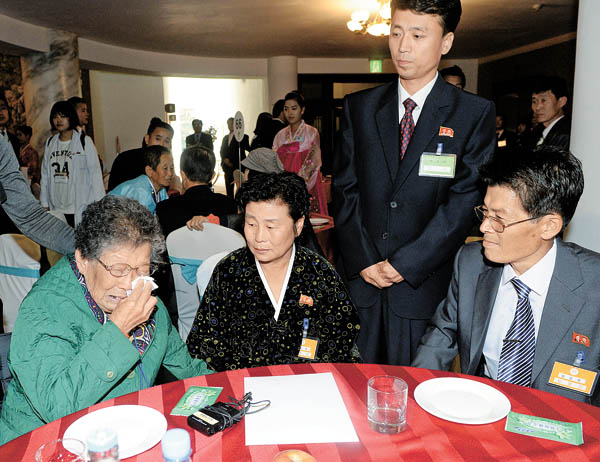 Lee Bok-soon, 88, left, cries upon meeting her son, Jung Gun-mok, far right, for the first time in 43 years during the first day of the second round of reunions Saturday for the families separated after the peninsula’s division. To Lee’s right is her daughter-in-law, Pak Mi-ok, whom she met for the first time. Jung was one of 25 fishermen abducted in the West Sea in 1972 by North Korea. To Jung’s left, a North Korean official oversees the conversation. [NEWSIS]

MOUNT KUMGANG - A man walked toward an elderly woman sitting in a wheelchair at the table. And as he approached, he cried out just one word: “Mother!”

The two hugged and buried their heads in each other’s arms, tears streaming down their faces.

Jung Gun-mok was finally reunited with his 88-year-old mother - the first time in 43 years since he was abducted and taken to North Korea as a young man.

“I am alive and have lived a good life without worry, mother,” he said. “Why are you crying?”

It was a monumental moment for the 64-year-old, who had not been seen or heard from since 1972, when he was kidnapped by North Koreans while working as a fisherman off the West Sea.

There were 25 crew members on board two fishing boats who were taken that day, and neither Jung’s mother nor his two sisters ever heard what become of him.

It was only on Saturday, when the four were brought back together during the second and last session of inter-Korean family reunions, that they could finally have some semblance of closure.

The expression on Lee Bok-soon’s face was one of disbelief, conveying all the sorrow and grief experienced over a lifetime by a woman who once lost a young son, only for him to be found, some four decades later, a seasoned man.

Sitting alongside her two daughters, who had accompanied her from the South, Lee’s heartbreak could not be contained. Wiping away his mother’s tears with a handkerchief, Jung turned to his sisters and hugged them and cried.

“Thank you for being alive,” said Jung Jeong-yang, 54, who was just 11 years old when her older brother vanished.

The elderly Lee then turned to her newfound daughter-in-law, who came with her husband to the reunions, and enveloped her in her arms.

But their homecoming Saturday was just one of many for the 442 South and North Koreans who attended the last round of reunions for the families separated during the 1950-53 Korean War.

For those 90 families, who gather together at the scenic Mount Kumgang resort north of the world’s most heavily fortified border, it was the first time seeing their loved ones in 65 years.

The Jung family was one of two families who participated in the second round of reunions whose family members were kidnapped by the North Korean regime.

While Jung was abducted in 1972 - 19 years after the conflict ceased - Moon Hong-ju was taken away during the war to North Korea, where he died in 1996.

His son and daughter-in-law attended in his place, meeting Moon’s sister, who resides in the South.

But despite all the decades spent apart, the families had a mere 12 hours of face time through six events before the time to separate came again.

About 250 South Koreans from 90 families crossed the border into North Korea earlier Saturday, bringing with them a flurry of gifts - vitamin pills and winter clothes - with the knowledge that their relatives on the other side of the demilitarized zone are likely lacking such necessities.

After 60 years, North and South Korea technically remain in a state war since the 1950-53 conflict ended in a truce, not a peace treaty. Until the reunions, the families separated during and after the war had no means to communicate with their loved ones, much less confirm whether they were dead or alive.

The families had private meetings Sunday morning, which the media was barred from attending, and a two-hour luncheon at a resort, followed by another two-hour group meeting at Mount Kumgang Hotel later in the day.

Lee Geum-seok, 93, had what could be the last meal she ever has with her son, Han Song-il, 74, from the North. For that reason, she could barely eat, and instead wept silently at the table.

Many South Korean families told reporters at the site that their North Korean relatives appeared much more relaxed during the private meetings early Sunday, when they were not overseen by North Korean officials.

“My sisters [from North Korea] looked much more relaxed during the private meetings than during the group meetings. And they looked tense again when we came down for the luncheon,” said Koo Gang-seo, 40, who accompanied his father Sang-yeon, 98, to reunite with his two siblings.

The joy and emotion during the reunions was also sometimes punctuated by the North Korean relatives as they chanted propaganda, which was met with awkward and silence by their South Korean kin.

Pak Mi-ok, the wife of Jung Gun-mok, told South Korean reporters that her husband was allowed to be a member of the ruling Workers’ Party thanks to the mercy of the North Korean regime. Some North Korean relatives even cried out loud that the division was still in place due to the imperialist policies of the United States.

These kinds of unexpected outbursts were best illustrated during the first round Thursday when an elderly North Korean man stood up just 10 minutes before the families bid their farewells and loudly criticized the United States for what he said was its imperialist posture on the peninsula.

It is unclear whether these actions were voluntary or forced.

The families will say their goodbyes today after a final two hours together in the morning. Then, they will return to their respective homelands, not knowing whether they will ever see each other again.

BY KANG JIN-KYU and the JOINT PRESS CORPS [kang.jinkyu@joongang.co.kr]