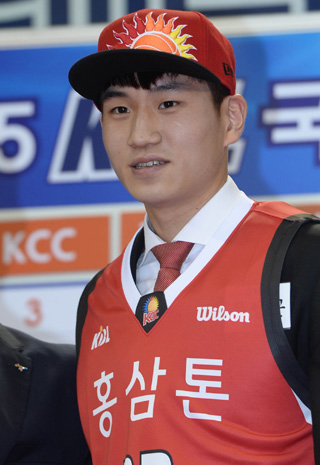 Before the season started, Ulsan Mobis Phoebus was not considered a title contender, despite having won the last three championships. That’s because key players like Moon Tae-young and Ricardo Ratliffe have moved to the Seoul Samsung Thunders, while veteran point guard Yang Dong-geun wasn’t initially playing with the squad because of his national team duties.

Making things worse, the team had to replace foreign player Leo Lyons after he picked up an Achilles injury last month. The Phoebus instead signed 40-year-old Joe Ira Clark.

But it turns out the Phoebus are defending-champion material after all. They are now on a seven-game winning streak after thrashing Anyang KGC 102-82 on Sunday at home.

The Phoebus are only two games behind the No. 1 Goyang Orion Orions after they were stunned by the Jeonju KCC Egis by a 95-88 loss at home, their second loss of the season.

The Phoebus will have two games on the weekend, meeting Busan KT Sonicboom - which has won its last two games - on Saturday at home before meeting the Egis away.

The Orions will try to extend their lead ahead of the Phoebus as they begin the week against the Incheon ET Land Elephants tonight at home. The Orions will then meet the Thunders on Sunday.

The Seoul SK Knights will try to end their three-game losing streak on Saturday when they meet Anyang KGC. The Wonju Dongbu Promy will have a six-day rest, as its game is on Sunday with the Elephants at home.

For the rest of the season, KBL fans have their eyes on Moon Seong-gon, as he was the No. 1 pick in the 2015 KBL rookie draft held Monday.

Moon, who will play for Anyang KGC, is a 1.96-meter (6-foot-5) forward who has already played with the national team at the FIBA Asia Championship in China last month.

The 22-year-old has been regarded as the top forward in Korean college basketball, leading Korea University to win the college league for three straight seasons. He averaged 10.2 points, 5.5 rebounds and 1.7 assists per game.

Moon’s debut can be seen Saturday, when KGC faces the Seoul SK Knights at home.

Kyung Hee University shooter Han Hee-won was the No. 2 pick for the Incheon ET Land Elephants, followed by Song Kyo-chang, who will be playing with the Jeonju KCC Egis. Song is the first high school graduate in KBL history to be drafted in the first round.

After the Uijeongbu District Prosecutors’ Office announced the results of its investigation into former and active basketball players, the time has come for the KBL to give its own punishment.

The prosecutors announced on Friday that among the 13 suspects, it decided not to indict 10, which include former national team members Kim Sun-hyung of the Seoul SK Knights and Oh Se-keun of Anyang KGC. Both had their indictments suspended, according to the prosecutors.

But among the three to be indicted, there is one active KBL player whose name has not yet been released.

The KBL announced in September that players who are subject to investigation will be suspended until the prosecutors complete their inquiry. As a result, the players have missed at least 14 games so far. But now that the prosecutors have announced the results, the KBL said that it will open its own discipline committee hearings this week.

It is expected that the player who is indicted will likely receive a lifetime ban from the KBL, while the 10 players who are not indicted are likely to return to the court after being fined and performing some community service.