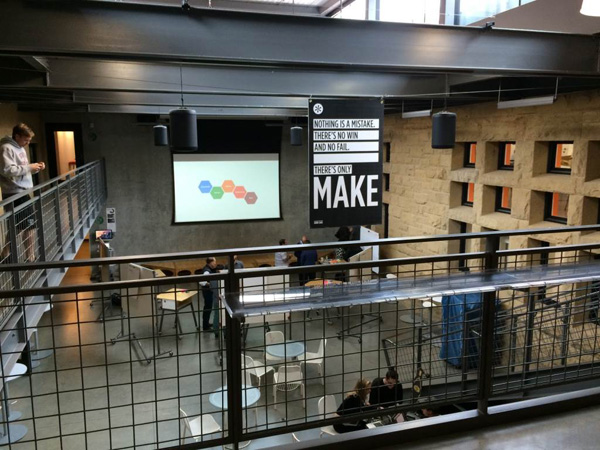 The course focuses on designing necessities for developing nations with few resources and technology. It is a popular class among the school’s curriculum. In fact, a product that is changing the world - Embrace - was born right there.

Embrace is a kind of incubator for premature babies. Five graduate students took note of the fact that 4 million infants die from hypothermia each year. Most underdeveloped countries don’t have enough incubators or electricity. After meeting mothers in India and Bangladesh who had lost their babies, they began designing a replacement for an incubator under $200.

They soon realized that maintaining the right temperature for the babies would drastically increase the chance of their survival and devised a sleeping bag padded with wax. If you heat up the wax, they can maintain their optimal body temperature for more than four hours. Thanks to the idea, babies in the places without $20,000 incubators can be saved. The class project finished with a successful prototype in 2007. The five students were then on course to high-paying jobs in Silicon Valley upon graduation.

But something made them stick to the project. As it turned out, the team moved to Bangalore instead of Silicon Valley the following year. They chose India, where the infant fatality rate is high.

What they experienced in the next three years until the first version of the product came out in 2011 was completely different from what they had imaged at Stanford. Prejudice and reality were blocking their passion.

But they didn’t give up. The students, who studied aviation engineering, business management and computer science, found that saving lives was worth devoting their youth.

Their story is well-known. The project that began in a university classroom is now saving tens of thousands of infants worldwide, thrusting Stanford’s d.school in the spotlight. On the other side of the Pacific Ocean, the design thinking boom that originated from the d.school is sweeping Korea. In an age when people are thirsty for innovation and creativity, many of them are gathering as if they found an oasis.

But it has to be verified whether it is an oasis or a mirage. When I was a student at Stanford 25 years ago, the d.school did not exist. But it wasn’t hard to spot it on campus. It was the colorful space in the uniquely beige limestone-lined campus. It didn’t even have its own building; instead, it was created in the space between the engineering school and the design school - only with a separate roof. This place was filled with students in small groups engaging in intense discussions.

When I asked what “design thinking” was all about, Professor Larry Leifer, one of the founders of the d.school, said, “Empathy!”

One should move a step further from user-oriented design to reflect the emotion - and even internal struggles - of the user.

Just like the Embrace team at Stanford, the designers need to get deep into the situation of the users. They must be able to experience the users’ discomfort as well as laugh and cry together. It takes sacrifice, but the outcome is amazing. The students simply designed a baby warmer and the world changed.

Having proposed an interdisciplinary problem-solving based on empathy as a new design paradigm, the d.school is changing the entire Stanford campus. Newly constructed buildings are designed so that various departments can share common areas like the cafeteria.

The departmental knowledge accumulated in the 20th century is crumbling before the rise of academic convergence and fusion. Funding is being channeled to convergence-themed research projects.

It now focuses more on solving real-world problems rather than abstract questions for the sake of it, while proposing “design thinking” as a new methodology.

As success stories pile up, students have become increasingly passionate about the concept.

After all, education focusing on solving problems leads to “purpose learning.” Let’s look at the problems humanity is faced with in the 21st century. From climate change to polarization to energy, poverty and the refugee situation, not a single problem can be addressed by specialists in a certain area.

What we need is cooperation, collaboration and above all, a sense of mission originating from profound empathy. Instead of choosing a major at college, students may someday need to choose a mission.

I hope to see the establishments of School of Climate Change or School of Hunger soon.


*The author is the director of the Art Center Nabi.