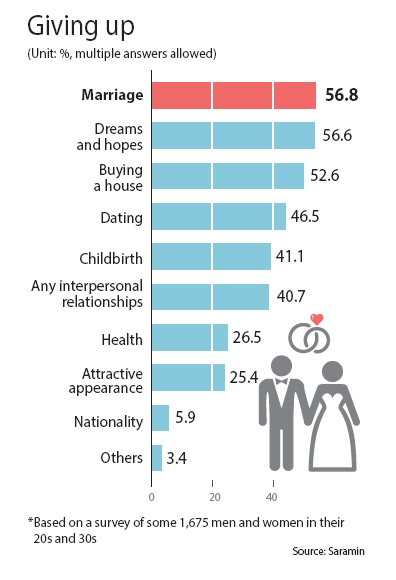 Some Korean women in their 20s and 30s are giving up on tying the knot, mainly due to economic difficulties of getting a job and maintaining their employment status, a survey has found.

Online job portal Saramin released a survey on Monday of a poll of some 1,675 men and women in their 20s and 30s. It found that 69 percent of participants considered themselves as part of the so-called “N-po generation,” a recently-coined term developed from words like sampo generation and opo generation that has emerged as a popular term online in the past two years.

The new term N-po reflects how today’s youth is getting more gloomy as they add the letter N, meaning they cannot even count how many rites of passage they have to give up because of their economic situation.

In the survey, 50.7 percent of women said they gave up on marriage mostly while seeking a job and even after getting a job, while men in the same age group said they have given up on most on their dreams and hopes about their future.

While participants were allowed to choose multiple answers, 56.8 percent, the largest portion, of both men and women voluntarily said they had given up on marriage, followed by dreams and hopes (56.6 percent), home ownership (52.6 percent), dating (46.5 percent) and childbirth (41.1 percent). Survey participants also said they involuntarily had to give up interactions with other people and maintaining physical appearance.

Most young people said they gave up their life goals after graduating from college and seeking jobs and right after they got employed.

Nearly 33 percent of participants said their personal economic stability is the most urgent solution to them alleviating their concerns, while 27 percent said the competition-oriented Korean social atmosphere should change.