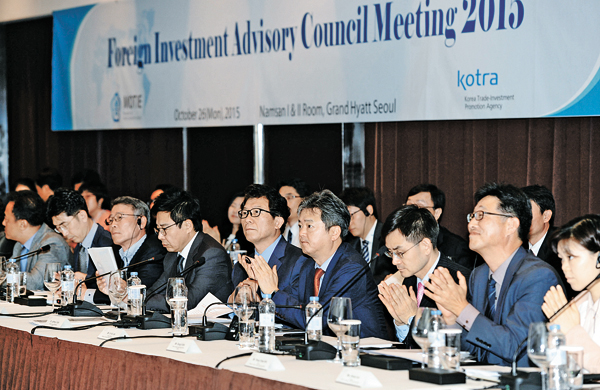 The government is to consider reviewing an extension to the real estate immigration policy for foreigners next year, which is scheduled to end in 2018.

Foreign investors requested the government extend the lenient immigration policy to let them stay in Korea and continue working on various business projects, such as resort complexes and regular apartment house bids open to foreign capital, saying the policy prevents them from making investment decisions.

The Korean central government and local governments have pushed for deregulation for foreign investors to attract foreign resort complex operators like Mohegan Sun and Chow Tai Fook of Hong Kong to invest in the nation’s major tourist spots, like Jeju Island, Yeongjong Island in Incheon and Busan, in order to develop them into a tourist hub of Northeast Asia.

However, the government has utilized it as a tool to boost foreign direct investment and tax collection.

The Ministry of Trade, Industry and Energy and the Korea Trade-Investment Promotion Agency met with the heads of nine foreign trade chambers and 20 CEOs of major foreign companies on Monday at a Foreign Investment Advisory Council Meeting in Seoul.

The Korean government launched the real estate immigration policy in 2010 to develop tourism spots with foreign capital and boost foreign investment, under the condition that the policy come to end in 2018.

The policy issued F-2 visas to foreigners who invested more than 700 million won ($616,700) towards government-designated real estate investment projects - mostly leisure and accommodation projects, such as those in Jeju Island, Incheon and Pyeongchang, Gangwon. The F-2 visa allows these businesspeople to reside in Korea for two to three years and grants permanent residency five years later if their business succeeds.

Normally, foreigners who have Korean citizenship as spouses or those who have resided in Korea for more than five years or more are granted an F-2 visa.

Since the policy went in effect in 2010, foreign investment in real estate in Jeju reached a cumulative 1.8 trillion won by the first half of this year.