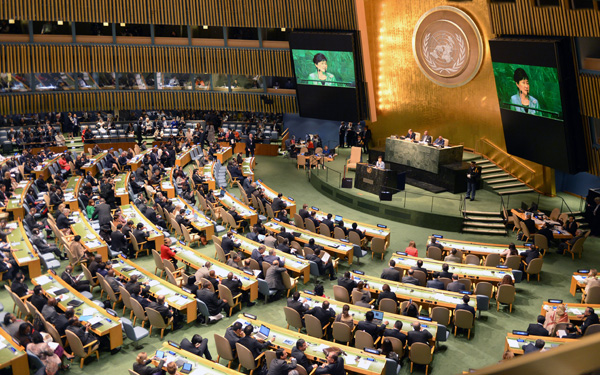 Not many passersby realized that Seoul City Hall’s night lighting remained blue all night on Oct. 24 instead of constantly changing. And even fewer people understood that the blue light marked the 70th anniversary of the United Nations.

To commemorate this meaningful day, more than 200 landmarks around the world were lit up in blue. The global celebration began at the Sydney Opera House, followed by the pyramids of Giza near Cairo, the Empire State Building in New York and the Palace of Westminster in London. The world turned blue, the symbol of the UN. But in Korea the event was little publicized.

Counter to the recent indifference, the UN was much more celebrated in Korea in the ’60s and ’70s. UN Day, the anniversary of the United Nations Charter in 1948, was a holiday in Korea for 26 years starting in 1950. An honor guard assembled for the celebration in front of the former capitol building and paraded around downtown. Sometimes, fancy flower-decorated carriages joined the parade. English speech contests and mock Olympics were held at universities. And Korea was not even a UN member yet.

Considering Korea’s relationship with the UN, it is understandable. UN forces fought off North Korea during the Korean War. While most of the casualties were American, over 3,000 soldiers from the United Kingdom, Turkey and other UN members were killed while fighting for Korea.

After the end of the war, the UN established the UN Korea Reconstruction Agency (UNKRA) to help Korea recover from devastation. The Seoul Medical Center, a cement factory in Mungyeong, a glass factory in Incheon and 77 reservoirs were constructed with aid from the UNKRA.

However, the memories didn’t seem to last long. Despite the UN recommendation to observe UN Day as a public holiday in 1971, Korea removed it from the holiday list in 1976. Korea finally joined the UN in 1991, and Ban Ki-moon became the secretary general in 2006, but Koreans’ awareness of the United Nations seem to be diminishing.

The UN Day ceremony held at a hotel in Seoul Oct. 23 revealed the lack of awareness. While some 400 guests attended the event several years ago, even though this year marked the 70th anniversary of the UN, only around 180 people attended. More than 40 National Assembly members were invited, but only two showed up.

It is widely believed that the role and influence of the UN expanded drastically since the end of the Cold War. But Korea is not interested in working with the UN, much less showing proper appreciation. Learning history is meaningless if we don’t show due respect for history.