‘The Phone’ opens in No. 1, surpassing ‘Martian'

‘The Phone’ opens in No. 1, surpassing ‘Martian' 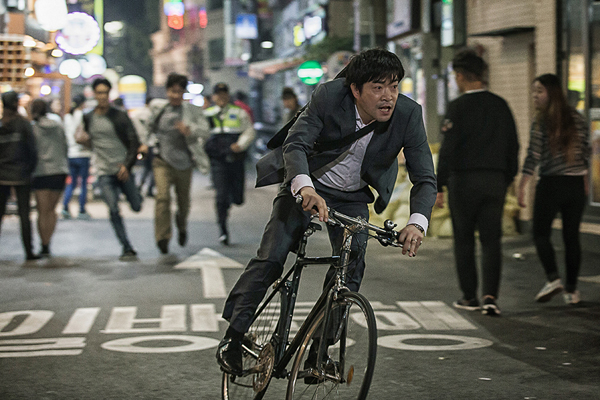 Son Hyun-joo’s latest crime thriller “The Phone” opened in the No. 1 spot in the Korean weekend box office. [NEXT ENTERTAINMENT WORLD]

Son Hyun-joo hit the right note again with his latest crime thriller, “The Phone,” which opened in the No. 1 spot at the Korean box office.

Veteran actor Son, who is often called the “king of thrillers” because of his filmography that includes a number of successful crime thrillers such as “The Chronicles of Evil” (2015) and “Hide and Seek” (2013), again managed to draw in moviegoers. The film raked in 613,239 ticket admissions over the weekend, earning 4.9 billion won ($4.3 million).

“The Phone,” by rookie director Kim Bong-joo, is a quasi-fantasy production with a heart-stopping story in which Dong-ho (Son Hyun-joo) receives an unexpected phone call from his wife (Uhm Ji-won), who is believed to have been killed by a mysterious burglar exactly one year ago.

Connected solely by cell phones, Dong-ho tries to bring his wife back to life by tracing back the details of the deadly incident that killed her 12 months ago.

Actor Bae Sung-woo, of “Office,” “The Exclusive: Beat the Devil’s Tattoo,” “The Beauty Inside” and many more, makes an appearance in this film, too, playing a former police officer who is somehow connected to the crime.

Matt Damon’s “The Martian” slipped to the No. 2 spot after being on top for two consecutive weeks.

It sold another 532,847 tickets during the weekend, bringing its three-week total to nearly four million. It has so far made 32.4 billion won in Korean theaters.

In third place was another much-anticipated local movie, “The Exclusive: Beat the Devil’s Tattoo,” which stars up-and-coming actor Jo Jung-suk for the first time as a lead character.

“The Exclusive” starts as a comedy in which Jo’s character Moo-hyuk, a TV journalist, reports an exclusive story about a murder case, which later turns out to be part of a script from a stage play. Moo-hyuk tries to stop the story from spreading further, but it is too late. He even has to fabricate stories for further exclusive reporting to maintain his position at work.

However, as the murder case begins to unravel in the second half of the film, “The Exclusive” tilts toward being a thriller, giving audiences a greater-than-expected feeling of suspense.

With a half-fish mutant (Lee Kwang-soo) at its center, the film examines a number of issues in contemporary Korean society. Actors Lee Chun-hee and Park Bo-young also star in the film, playing characters that represent issues revolving around youth unemployment.

The film was invited to festivals in Toronto and Busan this year and is slated to participate in the upcoming Taiwan-based Golden Horse Film Festival and Awards.