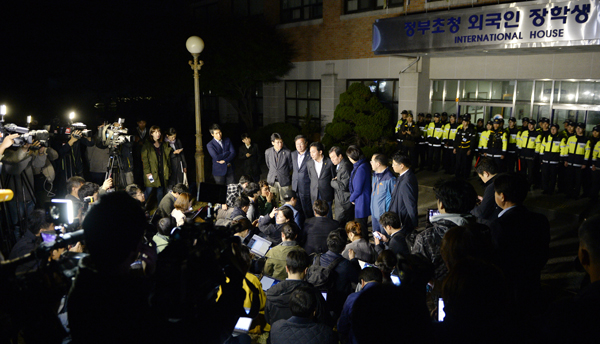 A group of lawmakers from the New Politics Alliance for Democracy hold a press conference Sunday night in front of the National Institute for International Education in central Seoul, the venue they claimed the task force handling the government’s campaign to restore state control over history textbooks was using as its office. [NEWSIS]

The Ministry of Education has operated a surreptitious task force over the past month to handle its campaign to reintroduce state-authored history textbooks and has briefed the presidential office daily on the progress, the main opposition party claimed Monday, as controversy surrounding the issue intensified.

As the New Politics Alliance for Democracy (NPAD) questioned the transparency of the Park Geun-hye administration over its decision to restore state control over history textbooks, the ruling Saenuri Party and the government denied that a secret team had been created, sidestepping necessary administrative steps, to manipulate the public.

An NPAD lawmaker said Sunday night that he had obtained the Ministry of Education’s secret plan to restore state control over history textbooks.

“The ministry has operated the task force since late September,” Do said. “I received a tip that this task force had led a campaign to label most of the current textbook authors as leftists.”

Around 8 p.m. Sunday, a group of NPAD lawmakers including Do headed to the National Institute for International Education in central Seoul, claiming that the task force was using the building as its office.

As the lawmakers and their aides attempted to enter the building, some people - reportedly public servants on the task force - turned off the lights and locked the doors from inside. Around 9 p.m., police troops were dispatched to the site and surrounded the building.

Aides to the NPAD lawmakers stayed outside the building overnight; opposition representatives returned Monday morning. Later in the day, a group of conservatives also appeared at the institute to rally and condemn the NPAD.

The NPAD has been at odds with the Park administration and the ruling party for weeks over the government’s plan to restore state control over history textbooks.

The Ministry of Education announced on Oct. 12 that it would take administrative steps to change the regulations governing middle and high school textbooks.

The NPAD argued on Monday that the task force had been created secretly weeks ahead of the ministry’s announcement of the plan, although the period for which to collect public opinion on the plan is not yet over. The ministry is scheduled to announce the final plan next week.

“There is no excuse for the government turning an education issue into a political circus, creating a secret team, briefing the Blue House daily and manipulating public sentiment,” said Kim Young-rok, an NPAD spokesman.

He added that Blue House Chief of Staff Lee Byung-kee and Education Minister Hwang Woo-yea had previously told the National Assembly that the government had not made a decision over state-sponsored history textbooks earlier this month, while the secret team was already in action to restore state control over the textbooks.

“This is a clear lie and perjury,” Kim said.

NPAD Rep. Kim Tae-nyeon, the opposition party’s chief negotiator on the Education, Culture, Sports and Tourism Committee, said the ministry had sidestepped the law when creating and operating the task force.

“I confirmed that the ministry workers started using this building shortly after the Chuseok holiday [on Sept. 27],” Kim said. “The ministry just made one phone call to the National Institute for International Education to use the building. It didn’t even send an official document.”

Kim also claimed the task force was formed outside the existing organizational structure of the government without proper administrative steps. “To create a special task force, the government must ask the Minister of the Interior for permission, but the Education Ministry did not follow that process.”

The NPAD also claims the task force has been manipulating public opinion by recruiting columnists to run editorial pieces favoring state-penned history textbooks in the media.

The ruling party and the Park administration criticized the NPAD for reacting irrationally to legitimate government work.

According to the Education Ministry, the task force was formed Oct. 5 because it was overloaded with the textbook project and needed a special team to concentrate on the issue.

The ministry has a history education support team, though it later expanded the team and formed a temporary task force as demands snowballed from the National Assembly for information about the intended changes in history education.

A senior presidential official said Monday that the Blue House was aware of the task force’s existence, but rejected the NPAD’s claim that it was running a secret campaign.

“I don’t know what is secret about this team,” he said. “The ministry said it is common to operate a task force for an important project, and that is also our understanding.”

The ruling Saenuri Party also condemned the NPAD and urged the government to take legal action against the opposition lawmakers.

Rep. Kim Young-woo, a Saenuri spokesman, further criticized the NPAD, stressing that it is common for the government to create a task force to handle an urgent project when necessary.

“The NPAD suddenly raided a group of public servants at work in the middle of the night,” Kim said. “They are still standing their ground against the police right now. This is lawless.”