As reunions conclude, sense of despair sets in

As reunions conclude, sense of despair sets in 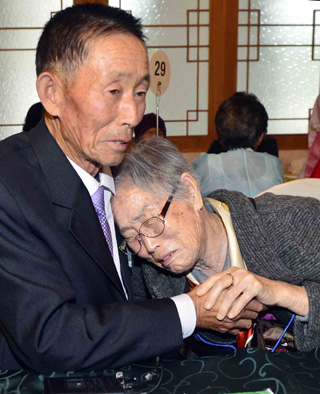 Lee Geum-seok, 93, weeps Monday as she prepares to bid farewell to her son, Han Song-il, 74, on the last day of the second round of inter-Korean family reunions in North Korea. [NEWSIS]

Lim Hak-kyu will remember Thursday as one of the saddest days of his life.

Just two days earlier, he saw his older sister, Lim Ri-kyu, for the first time in 65 years. Grasping her hands, he bid her and his nephew, Cho Chol-min, an emotional farewell in what could have very likely been the last time he would ever see them.

It was a dramatic moment for some 530 people from North and South Korea, who were reunited with their beloved ones for the first time last week after nearly six decades since their forced separation during the 1950-53 Korean War.

Only two days after they were reunited in the first round of inter-Korean family reunions, there they were again, facing the cruel reality that the moment could be their very last, and that, just like before, they would be ripped away from one another.

Lim was one of many who swarmed the sides of buses that would eventually take the North Korean families back home. He stretched his arms to the window to grasp his loved ones’ hands before he made his eventual return that day back to the South.

The idea that he was again separated from his family was hard for him to grasp. In fact, he said, he may have been “better off” had he not been reunited with his sister at all.

“Looking back, I now think it might have been better off for me had I not met my sister at all,” Lim, 80, who resides in Chuncheon, Gangwon, said in a telephone interview with the Korea JoongAng Daily on Monday.

There was an overwhelming sense of helplessness and frustration, he added, in the reality that there was nothing he could do now to ever see or hear from her again.

Lim was separated from his sister when he was just 15 years old, and until he was reunited with her last week - now an 80-year-old man - he said he had trouble sleeping at night, his mind filled with endless thoughts about his sister living in one of the most isolated countries in the world.

That same sense of frustration and depression is common among the other families who returned to the South following the fleeting reunions at the Mount Kumgang resort.

And the realization that the moment for which they had waited so long is now over, is almost too much to bear.

“The pain from the separation began to surface after I came home,” said Oh Jang-kyun, who met his father for the first time in his life on Oct. 20. “It was mostly only sadness I felt bidding farewell to my father on the last day.

But that sadness has multiplied over the past few days from the realization of what he must have gone through in the North all these years.”

Oh’s family drew heavy media attention during the first round of inter-Korean reunions because of the dramatic story of his parents. His mother, Lee Sun-gyu, 85, saw her husband vanish in July 1950 at the height of the Korean War, just seven months after they had wed.

It took Lee, who was pregnant at the time of their separation and never remarried, 65 years to see him again - except he had found another wife and has five children in the North.

Previous reunion participants have suffered from the same restlessness, disappointment and difficulty following their conclusion.

According to a survey conducted by the Korean Red Cross of 230 South Koreans who participated in the 19th family reunions in February 2014, which checked on their health and mental state, 44 percent of respondents said they had experienced difficulties after the event.

It was mainly due to the idea that they would never see their loved ones again, 63 people explained. And nearly 30 percent of the respondents said that they felt let down or a deep yearning, to the extent that it was difficult to go through their daily lives.

Eighty-three people said they felt “frustrated” after the reunions, while 20 said it would have been better had they never met their relatives at all.

An official at the South Korean Ministry of Unification said there had been no discussion about organizing reunions for the families who had previously been reunited within the past 15 years because there are currently still more than 60,000 people in the South hoping to be selected in the computerized lottery system to take part in the event.

But aside from the pain, many South Korean families said they also regretted the fact that they could not speak about certain subjects considered taboo during the meetings by the North Korean regime.

Authorities instructed the South Korean families before their departure to avoid certain topics during the meeting - they could not say anything critical of the North Korean regime, for instance, nor could they discuss the stark gap in living standards between the two countries.

The presence of North Korean officials at the site, some with escort badges, only added to that pressure.

Some South Korean family members told reporters at the site that their North Korean relatives appeared much more relaxed during the scheduled two-hour private meetings, in which North Korean officials and reporters were not present, despite the fact that their hotel rooms could have possibly been bugged.

The restrictive environment forced them to confine their conversations to childhood memories, rather though touching on more sensitive matters like their current situation - during the great famine that hit North Korea in the 1990s, for example, tens of thousands of people were estimated to have starved to death.

Lim said no one in his family dared to bring up political issues.

“Because we couldn’t rule out the possibility that the room was bugged, we couldn’t express ourselves freely,” he said. “At one point, we even got bored from talking over and over about childhood memories. … I couldn’t tell my sister how many cars each household in the South has or the high standard of living enjoyed by the people here.

He added that it would have been nicer if he had been able to stay overnight with his sister, now 85.

However, the two Koreas have organized the event so that the families are given 12 hours of face time, 10 hours of which consist of group meetings where North Korean officials and the media are present. Only two hours are reserved for private meetings.